“We are never gonna survive, unless we are a little crazy” – Seal

I introduced a friend and former house mate of mine, John Johnson on here before. Yes, he’s the guy who drank a pint of his own urine for Children in Need. On life’s corridor, you are unlikely to ever meet a crazier person. But not crazy in a bad way. He enjoys his life and just sometimes, John Johnson does things that make you stop and think “what the f**k?”. One night, he fu**ed a donkey, in my flat. 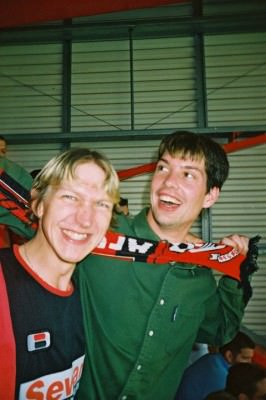 At the football with John Johnson – Bournemouth v Bristol City in August 2004. Later that night, he f**ked a donkey.

A few simple examples of John Johnson’s lunacy:
– He once drank a pint of his own piss for Children in Need
– He once set fire to a grasshopper in a pint glass in a beer garden
– He took all his clothes off in a nightclub once just to secure possession of a girls’ bra
– He once drank 2 full jugs of cocktails in the space of 10 minutes while drinking with me and my brother Marko, within 30 seconds he had been sick everywhere
– He has been to support Northern Ireland in two away matches and seen us win both times. He has NEVER stepped foot in Northern Ireland, or watched a draw or a defeat
– I shared a house with him for 9 months (not sure whether I was crazy to do that)
– On his 30th birthday I called at his house to find his girlfriend answered the door, John was upstairs in a bubble bath and wanted me to visit him in the bath to say Happy Birthday.

And then there was the day of the Bournemouth v. Bristol City match in August 2004. It was a normal lads day. I lived in a cool flat share in Springbourne in Bournemouth with my best mate (of 10+ years now), my mate Neil Macey, also known as Millwall Neil. 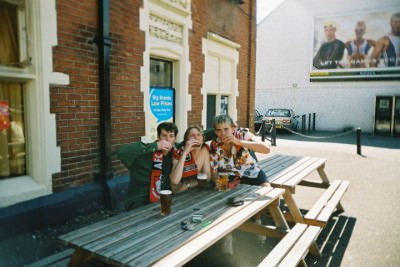 We had lunchtime pints and shots in the Dolphin Pub (my old local pub) and headed to Dean Court for the football. My mates Neil and Austin were both there. Bristol City fluked a last minute equaliser in a pulsating 2-2 draw and we agreed we’d do a night of rock music and pub crawl it back into town after the match. 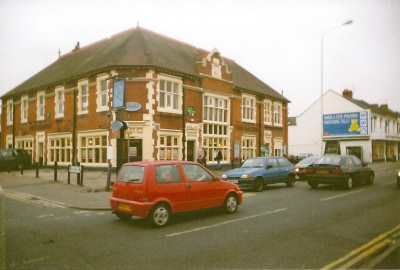 The Dolphin Pub, my old local in Springbourne

A few drinks in the Dolphin and we got some chips and takeaway food to eat at my flat, which was on the way. Neil and I had some cider in the fridge and we left John in the Living Room. We heard him shout “whose is the donkey?” pointing to an inflatable donkey that Neil had got for free in a magazine or nightclub promotion. It was a donkey from a film I think. We had a lads house and a lot of random stuff was in our living room at the time.

I walked into the living room with my cider and chips and John’s standing there with a semi erection, his willy just a few inches from the donkey’s ass. “Wait until Neil gets into the room he says”. I try not to choke on my cider and I’ve lost my appetite for those chips. John cracks a joke about a sausage and Neil walks in.

“I’m going to f**k this donkey” he says. Yes, John has his ass on display, his cockney cock on half mast and his y-fronts and trousers down to his ankles. Neil sets the bottle of cider down and John sticks his dick into the donkeys ass. 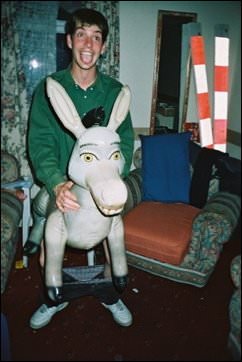 John Johnson shags a donkey – the night my mate f**ked a donkey in my living room!

He gives it a good f**k for a few minutes or so, in different positions. My camera was on the side and I felt it was too priceless not to photograph it. Thankfully my photo doesn’t reveal John’s manhood which at the time was stuck into a hole in the donkey.

It was Neil’s donkey. John shouts “I haven’t come yet”, my flatmate Austin turns up, walks in the door thinking “a man is f**king a donkey in my living room. John turns round, pulls his pants back up, fires the donkey into the corner and says “drink up lads, let’s go down the pub.”

Neil and I are left speechless. I witnessed the entire event, Neil came in half way to see his inflatable donkey being shafted up the rear end. Austin saw enough to get the message as to what John did.

The inflatable donkey had to be removed from the house after this and the memory has stuck for a long time. It’s just under 10 years since the night my mate f**ked a donkey in my living room, a good time to tell the story and put it to bed.

I later ended up living with John and he also travelled with me to Italy, Switzerland, San Marino and Liechtenstein but I ain’t seen him in over 5 years. Perhaps I’ll tell some more of his stories, as this one was actually rather mild.