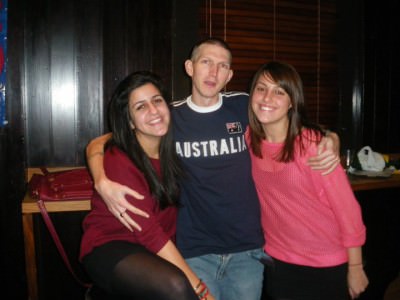 I took advantage of my Australian Working Holiday Visas, using my first and second year options and loved my time living in the land down under. There were many more highs than there were lows when I lived there, but one incident really had me furious and wanting to hunt down the culprit and $hit on his head. I was really lucky to have great flatmates when I lived in Parramatta in Australia. We had a cosy flat, I paid my rent weekly, I worked about 5-6 shifts a week (more if I could) in the local Irish Pub in Parramatta. I slept on a mattress and we had fast wi-fi and a decent kitchen. Life was pretty good. 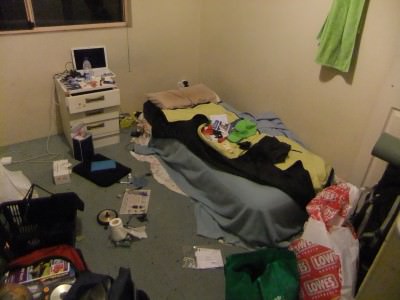 My mattress and temporary room when I lived, worked, partied and blogged in Australia.

It was a normal Friday night in May 2011, I’d been in Parramatta for almost 20 months and I left the flat and headed to work to do my usual Friday night shift. In fact, while living there I don’t think I ever had a Friday or Saturday night off work unless I asked for it. On this particular Friday I started work at 6pm, working in the Ground Floor bar with Laura, Charlie, Marlee and Christophe (from Belgium). There were a few other staff on too, Pravin and manager Paul. 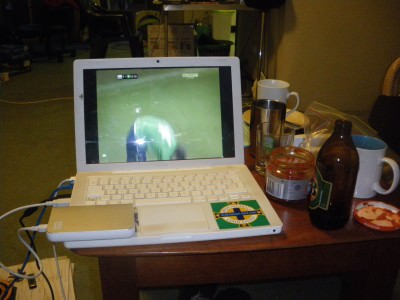 A normal day in the flat in Australia, blogging away, watching football, relaxing before work.

I had been working on my blog that day at home, up until 5.30 pm when I needed to leave for work. Those days gave me time to do my blog work in the daytime, catching up on my recent travels to South America, Africa, Tasmania and Antarctica. I closed my laptop and headed to work. I trust nobody when I travel and when I first moved into that flat I used to lock my valuables including laptop away in my bag when I headed to work – ask my roommate Daniel Evans – he once thought I was crazy locking my laptop in a bag. It would have still been there had I done it on this particular day. I got lazy, I got too trusting of Australia and so I left my laptop on the table in the lounge and headed to work. For some reason I disconnected my hard drive though and hid it under my pillow. A sixth sense maybe. The hard drive was worth more than the laptop – that laptop has been with me for 5 years and was coming to the end of its ability to function properly. 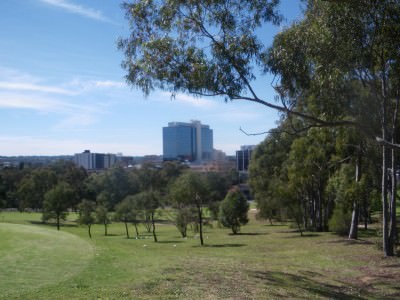 Friday nights I was normally out, but my flatmates would often be in – Rebecca and Ruben would eat together and Pete would chill out and be on his computer after a busy week of work. I worked in the Irish Pub that night and ended up finishing early, 2am, which was an 8 hour shift in total. Sometimes I’d work until 5am right until the end. At 2am, I walked my usual walk home through the golf course and park. It was routine. Yes even backpackers and nomads end up with “sort of routines” at points. 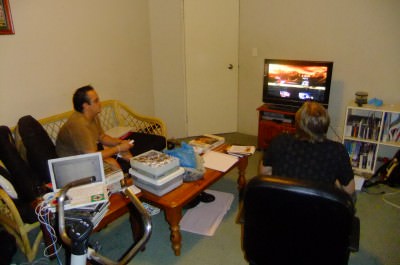 Ruben and Pete on a normal chilled out day in the flat in Parramatta, Australia. 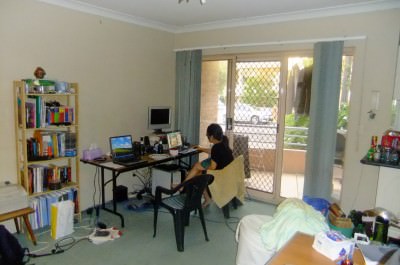 At home with Rebecca in 2011 in Parramatta, Australia.

I got home and all seemed normal, Ruben was on the computer, Rebecca relaxing and Pete in his room. At first glance I saw my laptop wasn’t on the table but nobody said anything to me, so I assumed they had just moved it to have their dinner on the table. I planned to have a shower then go online to get a live webstream of the Wales v. Northern Ireland match that morning live from Dublin. It was on around 4/5am I think and I’d watch it on my laptop at home, though I often watched them online with Pat in a pub in Sydney. 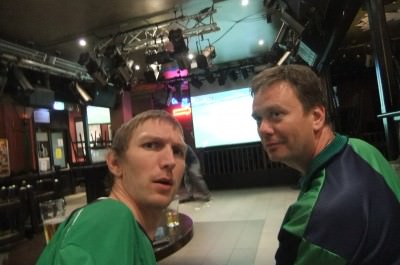 I hot used to watching football with my mate Pat at silly times of the morning in Australia – but I planned to watch the NI v. Wales match at home.

I had my shower in the bathroom yet noticed the window completely open, then got out ready to go onto my laptop. It was a white Apple MacBook and I’d had it since 2006. Almost 5 years. I started my travel blog on it, I backpacked through all 7 continents with it and it was always safe with me. Sure, it had broken 3 or 4 times and Apple had to try and fix it. I’d replaced the battery twice and it made a squeaking noise, but it still worked OK. I asked Ruben where my laptop was. He seriously didn’t know. My first thoughts were that it had been stolen, but then how could it – neither Ruben, Rebecca or Pete had said anything to me and they were all using computers as normal – Ruben on his desktop though. 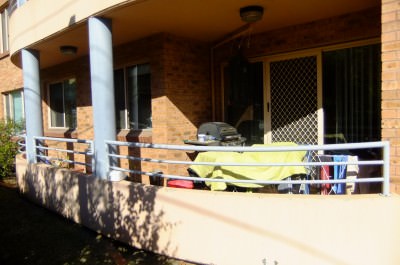 The balcony in our flat in Australia.

I had a look around for my laptop and still couldn’t find it. It was gone, I was sure. But on my mattress was $50 US Dollars in cash (untouched), about 400 Hong Kong Dollars, a camera and some other things like CDs and DVDs so I thought “It can’t be a burglary”. Then Ruben, beginning to wonder comes out with “Oh no my laptop has gone too, and my hard drive and the bag it was in”. Yes, we’d been burgled. Pete and Rebecca then check their stuff and nothing seemed to be gone. Odd. 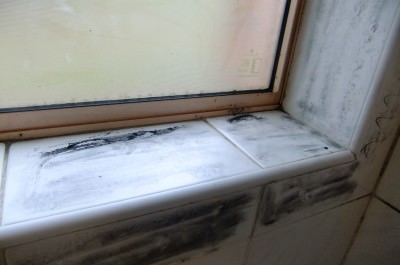 Finger prints on the windowsill after the Forensic team checked them out.

Then another look in the bathroom revealed that the mosquito net had been ripped off, the window was open and fingerprints were on the windowsill. Some asshole had climbed in through the bathroom window in the dark, had a quick look around, seen my laptop and Ruben’s laptop and nicked them, then went back out the same window. He done it in a rush. I had been out at work from 5.30pm – 2.30am. The others were out for food and cinema from 7-10.30 pm isn. Gutted – my broken laptop was gone. 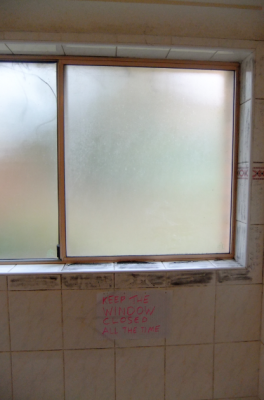 The window the burglar climbed in through – Pete had left it open. It was dark and nobody was home.

My laptop wouldn’t turn on unless you knew the password, even then, it was making a squeaking sound so you needed to know how to operate it. I was used to it and could have it working. Whoever nicked it would have been able to do NOTHING with it – it was worth NOTHING to them. They couldn’t even sell it as I had it password protected, squeaked like a mouse, covered in stickers and had written “Jonny’s Laptop” on black permanent ink on it!!! It had served me well but I just wanted to meet the asshole that stole it and crunch the bastard. He will find no use for that laptop whatsoever. He wasn’t to know that when he nicked it. A$$hole.

Rebecca called the police and reported the burglary around 3am and they sent forensics round the following day. The burglar must have been a total novice or have been disturbed, or he didn’t have a torch. He had missed our phones, cameras, cash on my mattress, DVDs etc. and taken two things that were worthless to him. Two passworded laptops and Ruben’s hard drive was also gone (it had episodes of Friends and Smallville on it – we watched them endlessly in the land down under!). 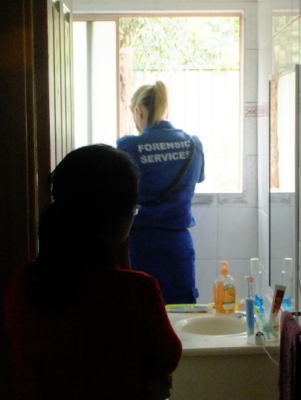 The Forensics lady comes the next day to take the fingerprints.

The culprit was never caught. He must have done other burglaries in the area. I lived in a quiet street, Belgian Street in Westmead side of Parramatta Golf Course. To think that some asshole had nicked my laptop made me so angry. 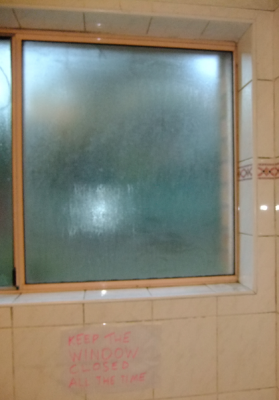 This window had been left open – easy target.

The following day I flew to Hong Kong to meet Panny Yu, and having got a job while on holiday there decided to call it a day on Australia. I worked a few more shifts in the Irish pub in Parramatta, left my valuables with Panny in Hong Kong and was done.

I went almost 3 months without a laptop – if you notice my Don’t Stop Living archives back catalogue for May – August 2011 there aren’t many posts – then this is why. I’m still catching up on those posts to this day. And that’s this assholes fault.

If you were ever offered a squeaking white Apple MacBook with “Jonny’s Laptop” written on it, with Northern Ireland and Oasis stickers on it in Australia let me know. And crush the bastard.

Lesson learned – lock your valuables away at all times – even in your own home, a flat share or a hostel. I’m much more cautious with my laptops and possessions now.

The ba$tard will get some serious bad karma coming his way!!

9 thoughts on “The Night Some A$$hole Burgled Our Flat in Parramatta, Australia”