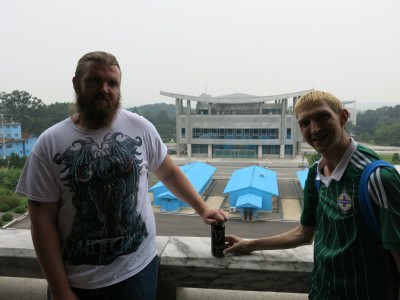 Thirsty Thursdays: Did you hear the one about the Northern Irishman and Southern Irishman sharing a can of Guinness on the North to South Korea border??

Did you hear the one about the Northern Irishman and the Southern Irishman drinking Irish stout on the North Korea to South Korea border? Hands across the divide – two countries on one island, two countries on one peninsula. One love – Guinness. The black stuff. Through my time working in Irish pubs and backpacking in Dublin, I’ve certainly enjoyed my pints of Guinness down the years. Get ready for this one… 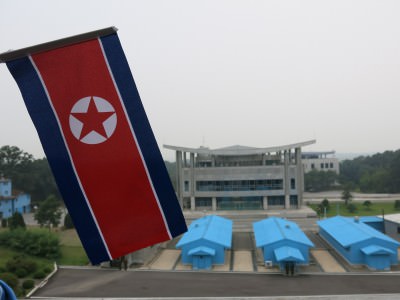 The North Korean side of the border at Panmunjom!

So as far as thirsty Thursdays, tins of beer and nomadic Irishmen go, this has to up there with my favourite drinking moments of all time. I took a few tins of Guinness into North Korea with me on my trip with the fantastic Young Pioneer Tours. After donating a couple of them to my North Korean tour guides, and drinking one in my Pyongyang Hotel room, I had one left as we boarded a bus for the DMZ. We were heading down from Pyongyang through Kaesong and into the De Militarised Zone. This stretch of land marks the North Korea to South Korea border! 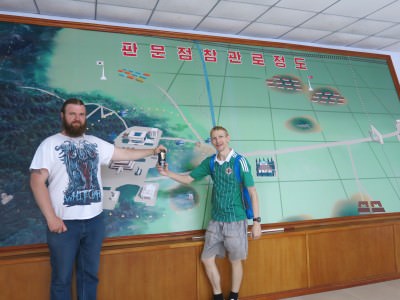 Robert and I get ready for the Guinness drinking at the DMZ border.

The DMZ wasn’t new to me of course, and life had gone full circle for me yet again. Back in 2011 I had done the DMZ from the South Korea side – the same week that Kim Jong Il had died. That was an immense trip, which I covered here: Backpacking the DMZ. 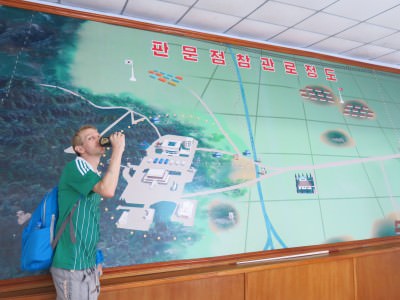 On the North Korean side of the border.

Here I was on the North Korea side in September 2013 this time doing a mini tour of the country based around National Day. While backpacking in North Korea I got introduced to a fellow Irishman Robert, nicknamed “the Viking”, this was a Dublin lad enjoying the adventure round this gem of a country! Robert was on our tour but on the other bus. Yes, they like to keep everything North and everything South divided. Not just in Korea, but in Ireland of course. Just before we arrived at the actual DMZ Building I asked Robert if he “fancied a tin of Guinness”. “Of course, but no chance of getting one here” came his expected response. Then I unleashed the black tin from my pocket and it was a done deal. We agreed we’d neck the tin together on the North Korea to South Korea border. Northern Ireland – Republic of Ireland drinking Irish beer in one of the most heavily manned borders on the planet! 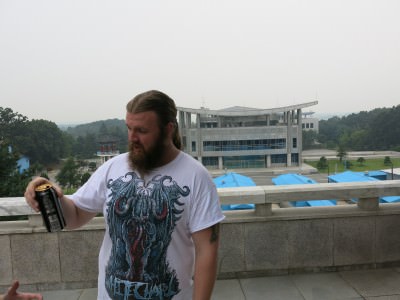 Thirsty Thursdays: Robert the Viking ready for the Guinness on the North Korea to South Korea border.

My girlfriend Panny Yu was on hand as ever to film the episode for my Don’t Stop Living You Tube channel. The whole thing ran pretty smoothly. We headed to the top floor of the North Korean DMZ building. From there you look down on the South Korean side. Each side of the divide takes it in turn to occupy the actual border itself. 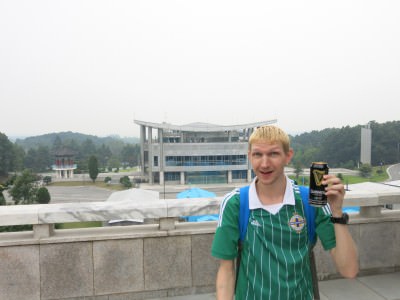 Thirsty Thursdays: It’s Guinness Time at the DMZ on the North Korea side of the border!

The first thing I noticed having been to both sides of the border was how relaxed things were on the North Korean side. The soldiers came over and had a chat, posed for photos, chilled out. They weren’t interested in the slightest about what was going on across the border, or that we were all there as new age backpackers taking more photos than a Japanese tourist. The South Korean side of the border had been so much more strict. They even dictated what you could and couldn’t wear on that side of the border at Panmunjom. You weren’t even allowed a bottle of water on the South Korea side. Yet here we were armed with a cold (ish) tin of the black stuff! 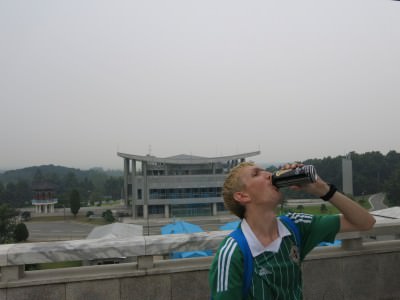 We found a quiet moment and a good vantage point and it was Guinness time. Robert and I cracked open the can of Guinness and shared it and necked it between us at the border, in full view of both countries. The taste was delicious. 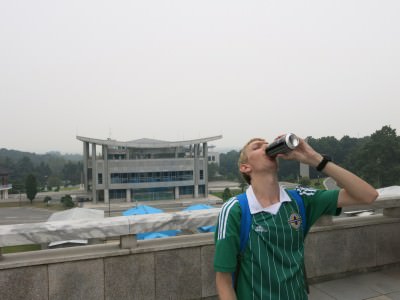 It was a 440 ml tin and for 2 travelling Irish lads this lasted about a minute flat, but that’s all we needed. We had our sips, we finished the can and we toasted to the North and South divide. Whether it was Ireland or Korea, there was something political going on within and this was a top travel moment. 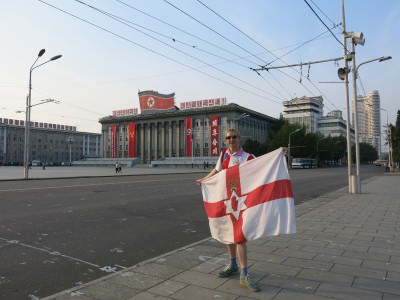 For those of you that have followed my adventures or met me in real life, you’ll know I’m a proud Northern Irishman, from the town of Bangor who likes a Guinness.

Incidentally if anyone at Guinness is reading this and wants to sponsor my travel blog, sponsor my travels or even give me the odd pint, I’m well up for it. I’ll be happy to promote the brand as I jaunt around the world. Also if you want to head to North Korea – I can help you get 5% discount on any tours booked if you quote my travel blog. Iraq up next, now where can I get a decent pint in Kurdistan? Until the next time, enjoy the moments and safe travels…