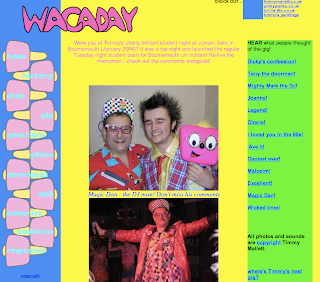 In the 1980s as a kid I always used to watch the morning television shows, it was the entertainment at the time wasn’t it? I don’t watch anywhere near as much TV nowadays, but I do remember Timmy Mallett, his ‘Wacaday’ show and the awful single (but funny) “Itsy Bitsy Teeny Weeny.” So having lived in Bournemouth for a few months, there was advertised a “Timmy Mallett night” advertised on a cold Tuesday in January 2004. It was to be in the lively Jumpin Jaks nightclub by Bournemouth Pier, so naturally I wanted to go and meet Timmy Mallett and also to get hammered. I had to see who else was up for it. There was Steve Compton, my housemate at the time and he was always up for a night out, so that was two of us. We then got in touch with some Winton-based mates, namely Jody Casey and Dancing Andy and the night was ready to begin. A few of the girls I hung out with at the time (Abi, Australian Emma, Claire and Hannah) all turned down the night as did Dan and Austin, so it was just the four of us, a lads night to meet an ex-TV star… 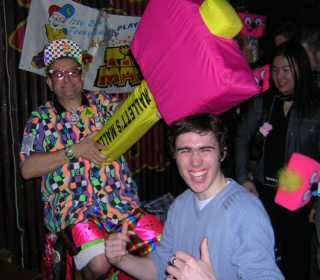 I picked Jody and Dancing Andy up and we got a carryout on the drive back to mine, where Jody saw fit to buy a Star Wars Limited Edition Clingon Beer. We sat at mine sipping the carryouts and then decided to head in a taxi (cold winter and easily split between four of us) to the Moon In The Square, the Wetherspoons pub. Once in there we started necking the beers and alcopops. You know, the amount I used till drink in them days startles me now, I really don’t think I could handle that much now! We didn’t book tickets for the Timmy Mallett night, assumed we’d be OK on the night, on the door. And we were although there was a big queue. I remember Jody had a few mates going in there as well (who I would also later know quite well through media at Bournemouth University) – Dave Paine and Andy McGill. Once we got into Jumpin Jaks we realised how cheap it was – Tuesday’s at the time were student nights and those VK alcopops were £1.50 each as were pints of Foster’s. We started on the pints and as the night got older, we were younging ourselves down with the multiple flavours of cheap VK alcopops (anyone out there care to remember Husky’s Clear? Or Smirnoff Mule? – they were MY teenage alcopops!), which included cherry, orange, lemon, apple and possibly another flavour (let’s say avocado…). We were necking them all really quickly as the place got rammed and Timmy Mallett came on stage amid a load of cheers. Not only did he look the part and was dressed the same way as he was in the 1980s, but he had two fit ladies with him. 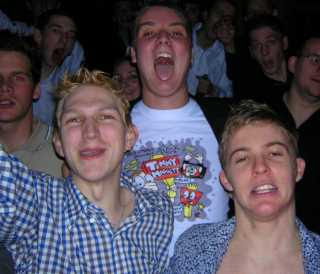 The ladies were really attractive and time and again they would put money, or pieces of paper down their bikini tops and bottoms. I got excited hoping for fanny glimpses and nipple slips. In those days I was always horny. Soon though Jody had come back from the bar telling us that all the shots were £1, Corky’s Apple and Cherry. So we all chipped in about £10 each and ended up having 10 shots each, the last ones of which were delivered on a tray there was so many of them. We downed them as Mallett asked members of the audience on stage for a gameshow. All of us were too pished and enjoying the shots too much to care about the gameshow. I just wanted to see Mallett, get hit by his hammer, get his autograph and literally GET HAMMERED. It didn’t take long, on the next trip to the bar Dancing Andy told us that we had used up ALL their remaining shot glasses with our antics. Hardly surprising as we had necked 40 between us, encouraging the bouncer at one point to come over to me and ask “are all those shots yours?” “Aye the are” said I, honestly. The dancefloor was packed and hits such as Jason Donovan’s “Too Many Broken Hearts” had us all up dancing ridiculously to 80s pop music, then Mallett asked everyone to form a queue to meet him on the stage. Me and Jody queued and queued and eventually got to the front where Mallett whacked us each on our heads with his Mallett’s Mallett, I grabbed a quick autograph as well on a piece of paper, and soon we were back on the alcopops absolutely blootered. I’d met Timmy Mallett! 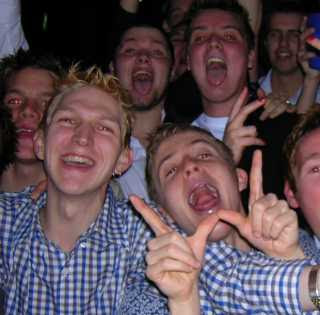 A wee bit after that we were all so wasted I couldn’t remember much, but Steve at one point turned to me and said “is that thon bird you pulled a few months back?”, and there she was a girl I pulled on a totally different night in The Opera House in Boscombe. I went over to her again (a Hannah), pulled her, she had a tongue and lip piercing, and I invited her back to mine to sleep in my bed. Dancing Andy and Jody also stayed at mine and Steve’s that night. We were totally wrecked! Hannah’s mate was also rather horny but had a strange nickname of “Skag”, Dancing Andy took a quick liking to her and pulled her back to mine as well just for a laugh. Dancing Andy later confessed that this lady “kept grabbing my balls and penis all night”, to be honest it’s not something to complain about is it? The next morning I gave the girls a lift home, and dropped Andy and Jody off as well. The four guys that were there that night will all recount fond memories of the night we met Timmy Mallett. For me its the first part, I decided to go and meet him again and I’ll post about that some other time! 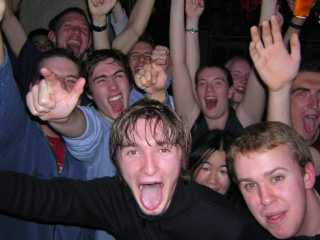 I didn’t take any photies that night, but luckily Timmy Mallett’s website and cameraman did and he managed to capture me and Jody at least at some point on his filim roll. That’s the one’s shown here. 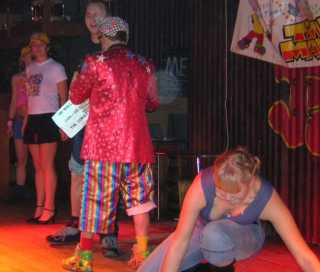 Timmy Mallett as a pop star, singing here on Top of The Pops his single “Itsy Bitsy Teeny Weeny” in 1990.