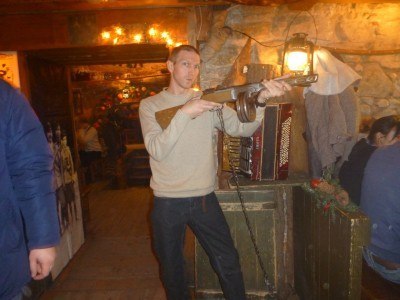 The fact that Lviv Ukraine is brimmed full of wacky themed bars is enough to make any keen pub go-er enjoy this thriving nationalistic city with some style and panache. And let me tell you, it ain’t no glammed up pretentious place either. Italians, leave your Ferraris behind; mainland Brits, forget trying to be a super cool fashion guru; oh and Northern Irish people, do as you do in Belfast – forget about politics and terrorism and enjoy yourself. The city pumps an unexpected, non obnoxious, “too cool for school” beat. And yes, it’s a gem for any tourist. Sometimes you gotta be too bloody obvious.

“You gotta be bad enough to beat the brave” – Noel Gallagher 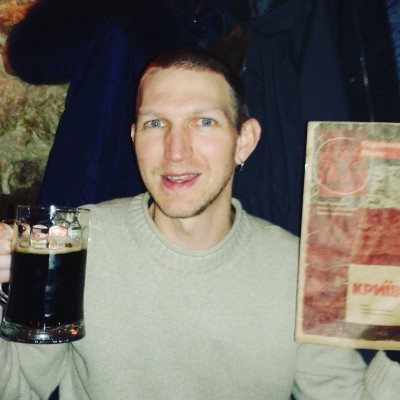 I had no idea that this city is a great place to relax, party, drink, eat and even blog.
After arriving into the city across the border from Poland, I sorted myself out with a brilliant five star hotel, the Citadel Inn. From here I set about touring some awesome sights including the must-see Ukrainian Liberation Movement Museum. By dusk it was time to hit up this easy to negotiate five pack. I had a little help along the way though. As I blogged and reported on my trip on the DSL Facebook page, a friend I know through supporting Northern Ireland told me of a few extra cool bars to check out on top of the hat-trick I’d highlighted myself. So thanks to Kyle, a fellow Ulsterman and current Lviv resident. Sadly Kyle was out of town on my visit but here’s my top 5. 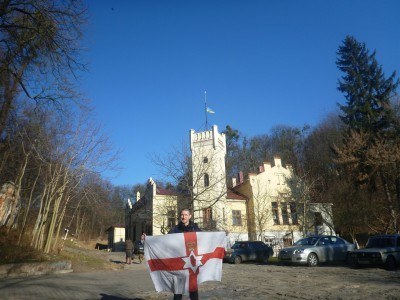 1. Cafe Masoch
Well well well. A tribute to a local lad? Sex tourism at its peak? Or just a historic bar here for making money? It appears to be all three and in my world, there ain’t not much wrong in that. Cafe Masoch (which featured on my last Thirsty Thursday) takes its name from the famous sex maniac Masoc who hails from Lviv. 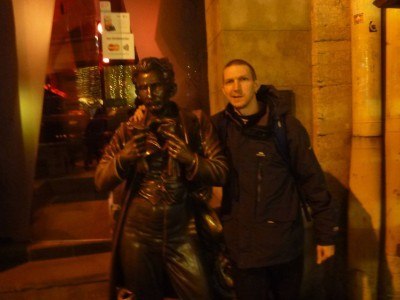 The day I met Masoch

It was the word Masochism that came from him. Head in for a beer and ask to get handcuffed and spanked on the ass or back! 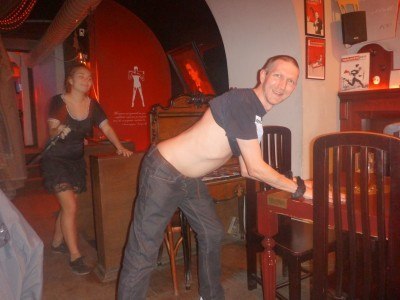 Getting Handcuffed and Spanked in the home of Masochism in Lviv, Ukraine

2. Kriyivka
To even get inside this “well known secret bar” requires a password. Head to number 14 in the main square and say “Slava Ukrainia” (glory to Ukraine) and once inside you are ushered down to the basement with a dude carrying a gun. 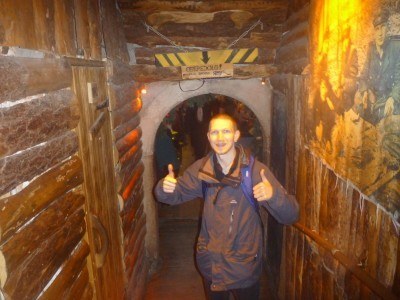 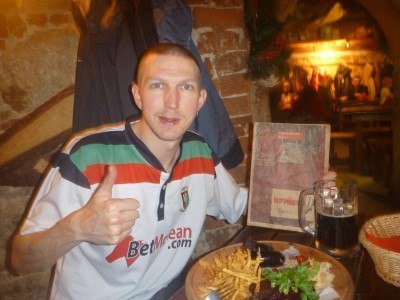 You get given a shot of red blood coloured vodka and can choose food and drink from a hearty old school menu. 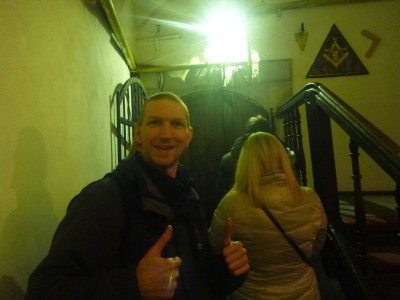 At the “Secret Entrance” to Kriyivka 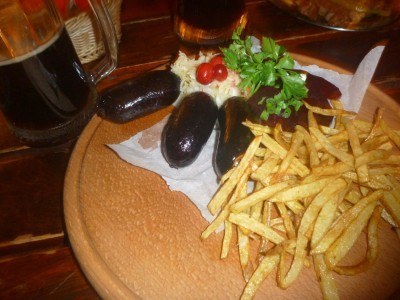 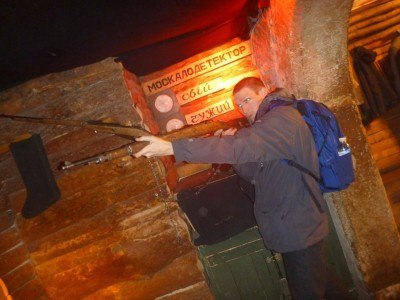 3. Pravda/ Beer Theatre
Spanning 3-4 floors and brewing their own beer, Pravda is a beer lovers gem. Kyle recommended Grapefruit Beer which was great. The bar looks out over the main square and has live music at night. And WiFi. 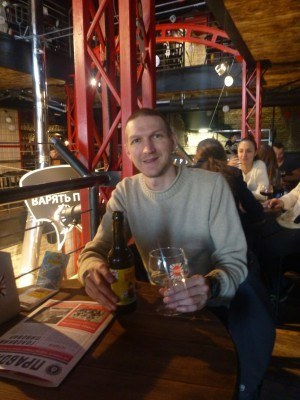 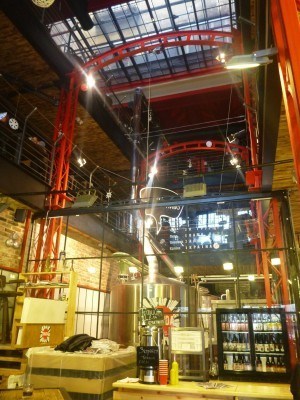 This was a tip off from Kyle Gallagher, so cheers mate and shame we didn’t enjoy a beer together there. Maybe in Nice or Lyon instead. 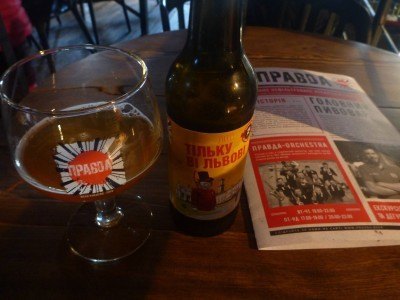 4. Kumpel
Situated on the main boulevard and up some stairs, this place also has good local beer. It was another tip off from Kyle to head here and try the Bigos and local Brew, so I did. 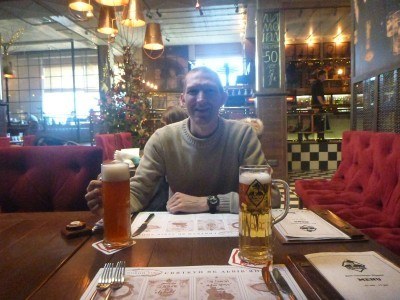 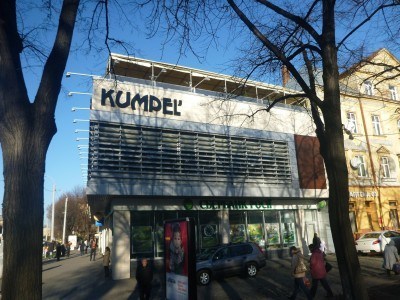 And Kyle’s tip was spot on. The Bigos was an excellent hearty dish for lunch and the locally brewed beer hit the spot. 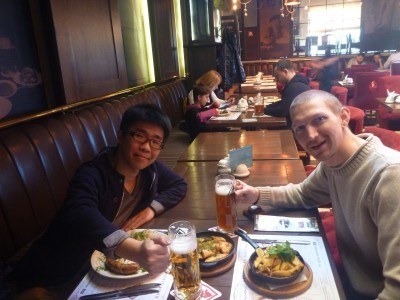 Ikuma and I in Kumpel Bar 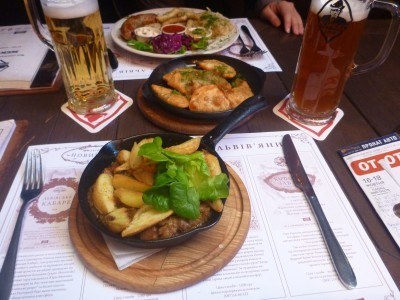 Bigos and a beer in Kumpel bar 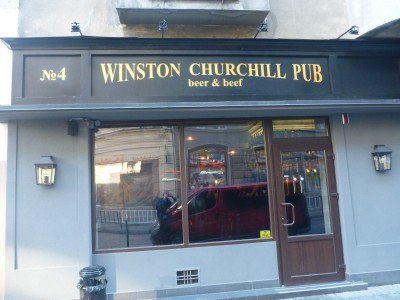 The pub has live football, foreign beer and a load of UK and Winky memorabilia on the walls. Pop in and try the local “Winston Churchill Beer”. It may well be a gimmick only, and just a local brew with this name but after a few sips you begin to wonder if Davey Cameron might need a drop more of this! 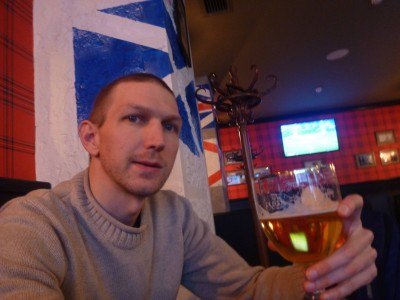 Having a beer in the Winky C Pub 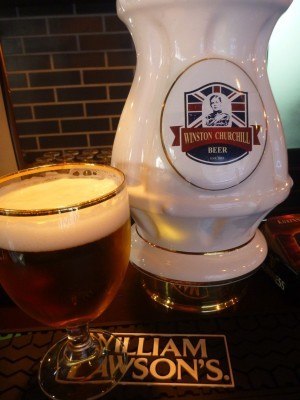 These are just my 5 personal favourites of course and you will find lots more cool bars in this pumping city of feel good spirit. I visited a few other bars including one called “Cantona” in what was a fab three days in this rocking city.

Here are some videos from my nights out in these wacky five in Lviv: