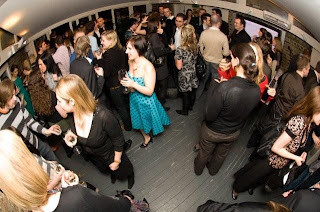 While working in Public Relations for Bite Communications, I would often get invites to exclusive parties, nights out, events and awards dinners. On 21st February 2007 I was proud to be invited to the Shiny Shiny Awards 2007 having made close contact with some journalists there through working on Apple and Sonos. Shiny Shiny is a website for gadget loving girls. It’s pink layout make it quite appealing to the female who is keen to learn more about technology and actually just any new product out there. The site was at the time run by Katie Lee and Susi Weaser. Two young budding journalists, PR ladies and indeed business ladies. Susi has written for many and various publications as well as having presented on BBC TV show Something For The Weekend. Katie has also written for many national newspapers and magazines. Both ladies are also very attractive for the male eye. 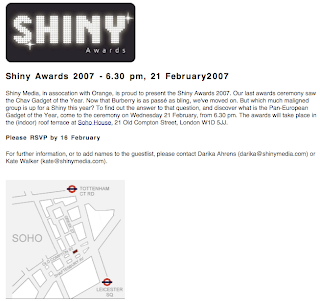 Other fellow workmates attending were Welsh Rhi Morgan and English Craig O’Boyle. We turned up at the awards bash in the posh Soho House top level bar near Lessy’s Q in central London. The beer was free and flowing, so I naturally enjoyed many Corona and Limes and began chatting to many and various journalists including The Guardian’s Bobbie Johnson, Shiny Shiny’s own Susi Weaser and The Metro’s Mark Harris. The two rooms were packed and soon the awards began. As the only person there doing PR for Apple, I collected the ‘Fashion Accessory Gadget of the Year Award’ for Apple’s Nike+ iPod Sports Kit. This was the only award for any of the clients I was working on. Unfortunately the Shiny Shiny team must have been using the Nike+ iPod Sports Kit too much, as the award itself was cracked, the glass having broken, with no replacement award unfortunately! Craig and Rhi also collected awards for products their clients had produced.


I drank long into the night after that, being one of the last to leave and I enjoyed a chat with fellow Northern Irish man Dave Oliver, who is a technology journalist based in London. Ironically Dave came from the Belvoir Park estate in Belfast, where I had previously done a course in Media Techniques and Competences. It was one of a number of nights out through Bite Communications and I enjoyed and savoured every moment. Perhaps when I look back, one of the things I will miss about working in Public Relations is the ease and speed at which you meet and find new people, events like this happen all the time in PR.