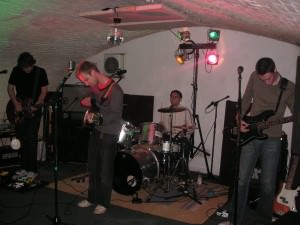 Working Wednesdays – the time i managed a rock band – The Waves at a recording session in Southampton, ENGLAND in 2006.

Of course travel leads you to random job opportunities all the time, some voluntary, some well paid, some just for the hell of it and others because of a pure passion for something (such as my travel writing and organising football events). For today’s Working Wednesdays we head back to a cheeseburger counter in Bournemouth, ENGLAND in 2005 and I was standing next to a rock star cooking burgers. I had met Ben Paulley, the songwriter and lead guitarist of local band The Waves. As we sold cheeseburgers, he invited me to his gig that Sunday night in Mr. Smiths (a rock venue which has since closed down). Immediately I loved the music and started to hang out with the band, going to the next lot of gigs which were in London, Bournemouth and Southampton. Soon I had become the Band Manager of The Waves. Not your everyday normal travellers job I can tell you!! 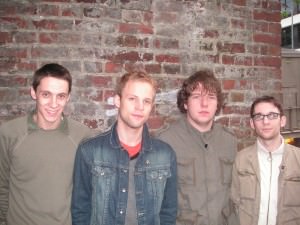 My Job role was to do the behind the scenes stuff for the band. Although there was no specific tasks, it was all about the music. Promoting the music! I loved the music. Fronted by James Corbin, a typical rock ‘n’ roll frontman. James was made for the job. Drummer Ryan Glover was a session drummer for Kasabian at one point. Ben Paulley my work mate wrote some amazing tunes and Andy Galliers the Bass player was a quiet lad. To describe their music would be a mixture of Oasis, the Bluetones, Embrace and R.E.M. The music sold itself – they could play and they were fantastic. In fact I was absolutely convinced we (yes, I felt like it was my dream too) would become monumentally famous. If the music industry was simply about good music and good PR, then we would have been. BUT we learnt the hard way, factors such as money, geographic location, time off work to play gigs and that special “in the right place at the right time” factor are more important in terms of making it. Shit bands have got decent record deals. Good bands have been touring for years and never sold a CD. It’s just the way it is. 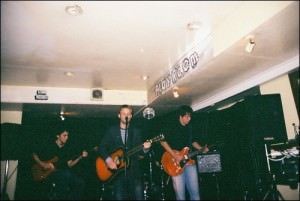 The Waves rocking the Playrooms in Paddington, London in 2005!

I would turn up at gigs, invite people to gigs, do fliers, try to sell CDs, create an e-mail list, play the band on radio (I was an FM DJ for Nerve Radio which is run by Bournemouth University). I also organised a few gigs. This progressed over a period of months and the band had two decent recording sessions. 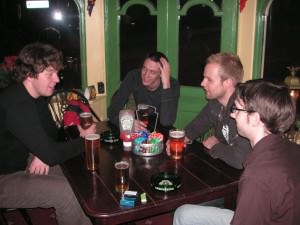 Having a band meeting over a beer after a gig in Southampton in May 2006!!

The biggest problem was we were all busy working, and we had girlfriends so our time together was basically gigs and recording sessions and it was back to work the next day. Looking back we were the best band at every gig we played at. EASILY. By a mile but things had changed by June 2006. The drummer didn’t turn up for a gig in the Green Rooms in Boscombe the night of the Sweden v. Paraguay World Cup match fueling rumours the band had split. I was piggy in the middle. Because we were all busy working, a bit of e-mail tennis led to a gig in the Southampton Joiners which we all kind of knew was the last ever “The Waves” gig. 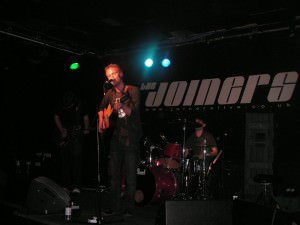 James Corbin, lead singer of the Waves rocks the place at Southampton Joiners in June 2006. This was the last time the Waves played together as a four piece and under that band name.

After that Ben and James played a few acoustic gigs together including one at Bar Fruit and I moved to London. The last band member I saw in the flesh was Ryan Glover at an Ash gig in 2007 and I saw Ben Paulley the same week as he called round to drop in a CD of his first solo album, Multiples. The odd thing is when I moved to London I suddenly got all these music contacts as I worked in PR for Apple and Sonos. It was too little, too late and the memories were fantastic. I know this isn’t an everyday travel story for the Don’t Stop Living blog and it’s a bit different but remember, this is my journey to share with you and every Working Wednesday is a different work related story from round the globe. When I managed the rock band “The Waves” I didn’t even have a travel blog (I started Don’t Stop Living in 2007).

In late 2007, I did some PR for Ben Paulley’s solo album Multiples and well, that was 6 years ago now. I still play the band all the time on my iPod and I know we were the best rock n’ roll band in the world at that time. Somehow my destiny was in travelling the world sightseeing and writing about it, not in managing a band. Cheers for the memories guys, may we meet again and rock to “Kaleidoscopes” again, some sunny day…

Working Wednesdays will return next week with a more ‘normal’ work related travel tale, or possibly not!

My Favourite ‘The Waves’ Songs: Fighter, Looking Like A Liar, Kaleidoscopes, Surrender, Something to Shout About

Other ‘The Waves’ Songs:  Create the Light, Blood on Your Hands, Simple, Redemption, The Tom Song

Videos of ‘The Waves’ (I have full gigs on VHS somewhere!!):

You can read other The Waves related posts here: