In my series on World Travellers, I bring you a wide and varied range of interviews with fellow travellers who are plotting random routes round the globe. Today I’m glad to welcome Andrea and John from Inspiring Travellers! It’s nice to mix single travellers with couples in this series and I love how they met in Greece while travelling and have joined forces on their journeys ever since… 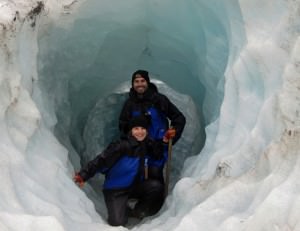 World Travellers: Andrea and John from Inspiring Travellers at the Fox Glacier in New Zealand

We are Andrea and John, a couple in our thirties who met while travelling and have continued to do so together for the last 8 1/2 years.

Andrea is originally from the United States and John is Australian.

North America, South America, Europe, Australia and parts of Asia. We’ve spent a little bit of time in the Middle East as well. 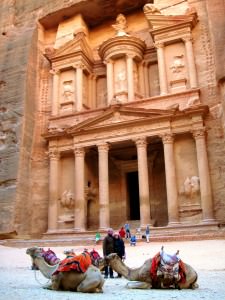 World Travellers on Don’t Stop Living – John and Andrea of Inspiring Travellers with some camels in Petra, Jordan

We currently live as expats in Norway. 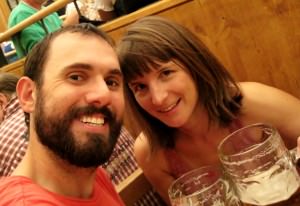 World Travellers: John and Andrea of Inspiring Travellers at Oktoberfest in Germany!

That’s tough! We both love Europe…if we’re talking continents I would say Europe, South America and the USA. We both love France, Germany and Uruguay.

Meeting in a tiny town in southern Crete has definitely been a highlight of our travelling lives. 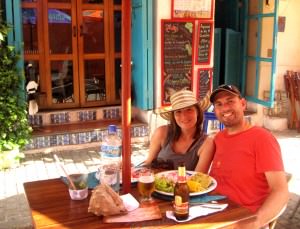 Andrea and John of Inspiring Travellers enjoy eating out in Cartagena, Colombia.

John got mugged in Prague, which was pretty scary. Andrea had a couple of dodgy experiences while travelling with her father in Bangkok back in 2001 – the old ‘the palace is closed today but we can take you on a private tuk tuk tour’ trick. Luckily they escaped.

1. Don’t over-plan; be sure to make room for serendipity.

2. Be open to meeting people because that’s one of the best things about travel.

3. Pack as little as you can and take more money instead. That’s a common answer but a true one. 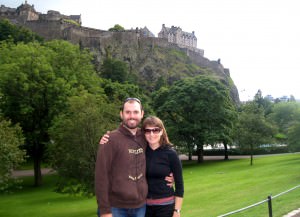 John and Andrea of Inspiring Travellers in Edinburgh, Scotland

We haven’t planned too far ahead this year but we do have a trip to France coming up at the end of March. We’ll be visiting Lyon and Bordeaux.

Biography:
>Andrea and John Spirov are a couple of nomadic thirty-somethings, travelling the world and living as expats. They run the travel blog, Inspiring Travellers, where they share their own stories and those of other travellers they meet along the way. They also regularly feature food, craft beer and accommodation reviews.

Get Connected with Andrea and John and stay up to date with their adventures!:

Thanks to Andrea and John for taking the time to do this World Traveller Interview. If you want to be interviewed in this series called world travellers, just get in touch with me, using the form below, the main requirements are that you have to own a travel website of some description and be a traveller:
Join 15,017 Monthly Readers! If you enjoyed this article and LOVE travel and SAVING money, get e-mail updates from Don’t Stop Living – a lifestyle of travel! (It’s Free) 😉 Jonny

4 thoughts on “World Travellers: Andrea and John from Inspiring Travellers”