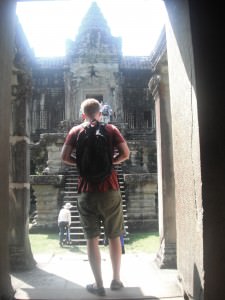 In my latest World Travellers interview I catch up with Sam Long, one of the youngest guys to feature so far in the series. Despite being only 23, he’s already done a load of travelling and is gagging for more!

I’m Sam Long, a 23 year old Sport Journalism graduate, who has been bitten by the travel bug relatively recently.

Sutton, South London is where I reside.

My latest trip entailed Thailand, Laos, Cambodia, Vietnam, Australia and New Zealand. In the past I’ve visited South Africa, France, Holland, Belgium, Italy  and Greece too. But my appetite has been well and truly whetted to explore some spots closer to home in Europe. 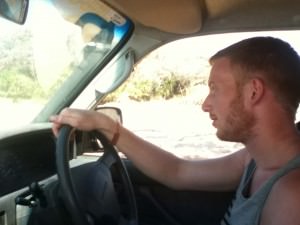 World Travellers: Sam Long on a 4×4 in Fraser Island

I’m back in good old Blighty. To be honest having struggled to reacquaint myself with the cold for a couple of months I’m now busy getting familiar with the disaster we call Summer.

New Zealand – The amazing scenery and landscape coupled with some once in a lifetime activities make for a blend that is hard to top.

Cambodia – Easily my favourite country in Asia, I loved the culture of Angkor Wat and the paradise that is Otres Beach. The locals never seem to stop smiling despite a horrific recent history.

Laos – Purely due to the gibbon experience in Bokeo Forest. 800 metre long zip lines through a dense jungle and living out a Peter Pan fantasy of sleeping in a tree house was a bit of me. 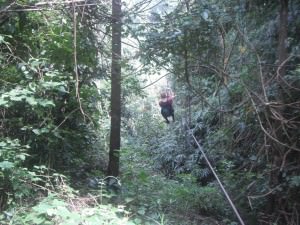 Swimming with wild dolphins in Kaikoura on New Zealand’s South Island, hands down. Having seen people swim with dolphins in places like Sea World it looked cheesier than a slab of cheddar flanked by two chunks of wensleydale. But this was different. Due an underwater canyon, whole pods of wild dolphins flock to the same spot of shoreline every day. Getting up close in their natural habitat was a unique experience. You can read a full blog post about it here. 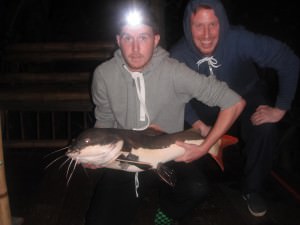 World Travellers: Sam from Sam’s Shenanigans with a massive fish!

Missing my flight to Australia and being stranded in the melting pot of Bangkok for a week was pretty grim. Admittedly there’s worse places to be in the world but I was ready to leave Asia and as someone with OCD mixing up my flight dates now leads to hours of checks, re-checks and the re checking of re-checks.
What is the funniest travel experience you’ve had?

This may sound cruel but a particularly funny memory involves my cousin being stung by a sting ray, although it was far from humorous at the time. In Cambodia, on Otres Beach, two of the locals went out to fish in the shallows using only a spear. My cousin was eager to join them so jumped straight in and followed. I wasn’t too far behind him but as I caught up with them he turned around and winced, saying he had just been stung. (The now dead sting ray was now safely in the fishermen’s bucket). But he seemed OK, and the local didn’t seem to be agitated or worried. My cousin said he felt a bit sick and was heading back. About 15 minutes later I had seen enough spear fishing and trotted back too. But I found my cousin in absolute agony biting his pillow and his girlfriend claiming he was going to have his hand amputated. Having drunk a few beers the situation didn’t really sink in and trying to explain to our Cambodians hosts that a sting ray was causing the pain was a bit of a struggle. Trying to act like a sting ray and my efforts to draw one proved unsuccessful but eventually they understood and said we needed hot water. Once my cousin dipped his hand in the water, the pain instantly subsided and he was OK within minutes. We all panicked at the time but it was one of those moments you can laugh about afterwards. Whenever I tell the tale to a friend it always raises a grin even though the main character was in a world of pain! 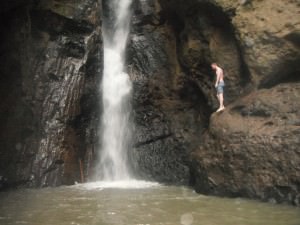 World Travellers: Sam Long at a waterfall in Pai!

What is the scariest travel experience you’ve had?
I was on board a horrible, small, cramped, sweaty bus in Vietnam travelling North and was relieved when the driver announced that we would be taking a short break. (If you’ve been to Asia you will know these breaks are unscheduled and sporadic at the best of times). After heading to the loo and buying whatever food was available I wandered back to the car park to find our bus had gone. With all of my possessions,(minus my passport and 50,000 dong), on the bus panic set in. There only option was to wait and hope the driver would turn up again. After just over an hour he pulled in with no explanation and ushered everyone back on to the bus. I don’t know where he had been, but none of my things had been taken so I really didn’t care. It was a scary feeling of isolation before the driver turned up again.

I haven’t really worked while I’ve been away but the most random job I came across was at Lake Taupo in New Zealand. There is a popular hole in one golf tournament where you pay a couple of dollars and try and whack a ball onto a platform in the middle of  the lake. If you fancied it, you could collect 500 balls for $20. Despite being desperate for beer money and the offer of a helmet I didn’t fancy getting knocked for six by a stray shot and steered clear.

I save up for as long as I can and then head for the hills. Whether I go for two days or two months is dictated purely by how much money I can get together. 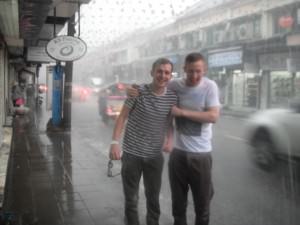 World Travellers: Sam Long getting caught in the rain in Bangkok

Try not to say no – You will regret the opportunities that you turn down.

Pack light – There’s no need to lug around unnecessary items in your bag.

Don’t plan everything – A strict itinerary you can’t take a detour from takes away part  of what is attractive about travel.

I want to discover more of Europe. I’ve seen more of Asia than lots of mainland Europe and probably even England! I’ve never been to Wales or Ireland but they’re right on my doorstep. I’m not really sure why but I’ve always wanted to go further afield first. But missing out on what is under my nose seems pretty stupid, so that has to change.

My dream is to go to South America. A good friend of mine has just got back from a trip there and it sounds incredible. If I could tie it in with the world cup next year in Brazil I’m pretty sure I could die a happy man.

As mentioned above I’m a 23 year old Sport  Journalism graduate. In a nutshell I’m consumed by Wanderlust, a liquid DNB & UK Hip-hop head and season ticket holder at AFC Wimbledon. I’ve just finished an internship with My Destination‘s content team but have just started my own blog (a work in progress admittedly). I’m hoping to work in the big wide world of travel writing with a couple of options to explore in the near future. Finally earning some moolah for my work would be nice, so if you like what you see please do get in touch! You can also check out all my latest work on My Destination.

Thanks to Sam Long from Sam’s Shenanigans for being the latest in my series of World Travellers! If you travel the world and run a travel blog or are a travel writer, please get in touch, you can be featured (there’s a HUGE waiting list at present), either e-mail jonny (at) dontstopliving (dot) net or head to my contacts page and get connected! You can also subscribe to Don’t Stop Living by filling in the form below! Safe travels!