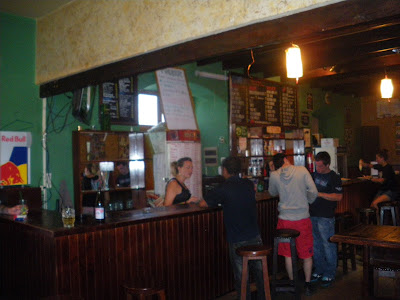 I’m surprised it’s taken me this long to actually write about my trip to the Wild Rover in La Paz, Bolivia, also known as the world’s highest Irish Pub. And it’s official. I have also been to Paddy Flaherty’s in Cuzco which claims to be the highest (and many others in Peru and Bolivia do), but for now the limelight is on the Wild Rover and the madness within. 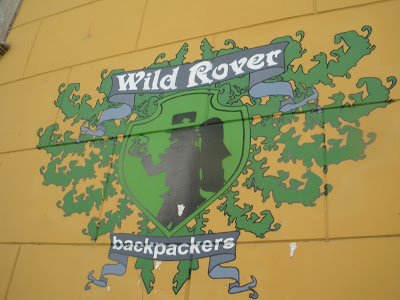 Housed in the lofty Bolivian city of La Paz, you can find the Wild Rover Backpackers on 1476 Comercio Street. I wasn’t actually staying there mind you, I chose to stay at the nearby Loki Hostel instead (it’s literally round the corner). On the first floor of the Wild Rover backpackers is housed a cosy, friendly wee Irish Pub, also of course known as the Wild Rover. At an elevation of well over 3,000 metres above sea level, this little enclave away from the monstrocity of La Paz had the nice honour of being the world’s highest Irish Pub. So I just had to pop in! 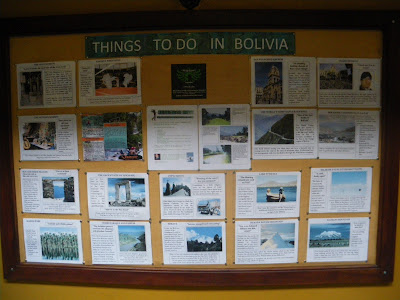 The Wild Rover Backpackers doubles up as a tour agent, and indeed I booked a few of my trips within Bolivia from here. There is a hell of a lot to see and do in Bolivia and I missed out on The Death Road (travelling on the world’s most dangerous road…by bicycle), San Pedro Prison and Rurrenabaque (Bolivia’s easiest Amazon excursion). But you have to let things go when you travel as you never have time to cram them all in and I was happy to visit the world’s highest football stadium (Estadio Hernando Siles) and the world’s highest Irish pub as cheaper and worthy substitutes (itself probably not even the right word to use). 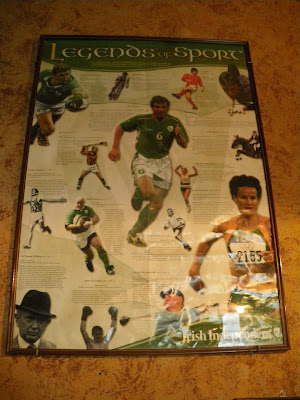 Mixing north with south here in terms of sporting heroes, indeed Northern Ireland’s George Best and Republic of Ireland’s Roy Keane both hail from the same island. Other heroes missed from this picture include Eddie Irvine, Alex Higgins, Darren Clarke and David Healy. Of course I’m biased though – I’m from Northern Ireland but at least Geordie made it onto the wall in the world’s highest Irish Pub. Great to see him there and made me feel at home. 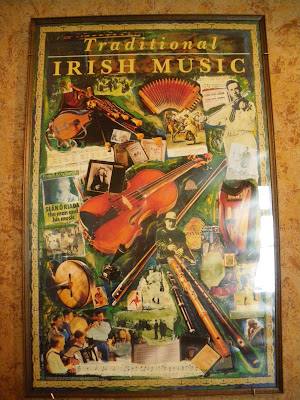 A picture showing the wealth of decent Irish music and musical instruments such as the harp, accordian and flute on display. 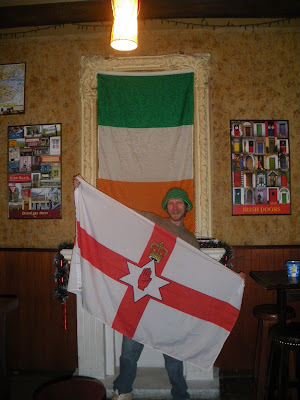 The must have photo. Even-ing things up I guess. Most Irish pubs only have the Irish Tricolour, and politics aside, I always carry my Northern Ireland flag! The proudness of being Northern Irish exists on the island as well you know. This was a very happy moment, but not the best moment in the pub… 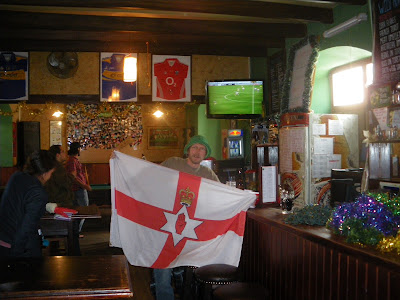 So it was pre Christmas in Bolivia in December 2010 (they were just putting the Christmas decorations up when I was there – as you can see from the above photo). Then as I sat down at the bar, I recognised the accent of the guy serving me! It was a strong Northern Irish accent! The first other Northern Irish person I had met in South America. Serving me an ice cold Pacena beer was Grant McParland, all the way from Carryduff in County Down, Norn Iron!!! 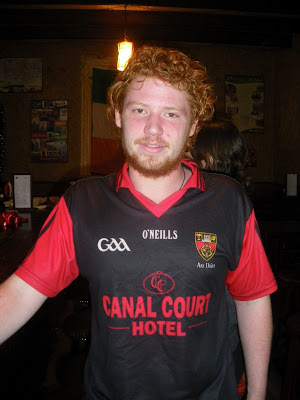 Straight away on hearing that I was a fellow County Down man, Grant gives up working behind the bar and comes and joins me for a beer! Imagine that in the highest Irish Pub in the world, drinking with a guy from literally just down the road. At the time, Down had just reached the All Ireland (Gaelic Football Final) and we spoke about that amongst other things, so Grant dashes out and grabs his County Down top! Red and Black with “An Dun” written on it. 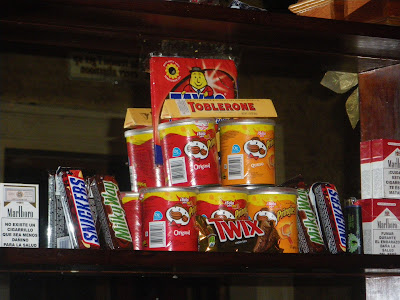 Behind the bara range of UK and Irish products including Milky Way and the Southern Irish Tayto. Much prefer the Northern Irish ones, myself! 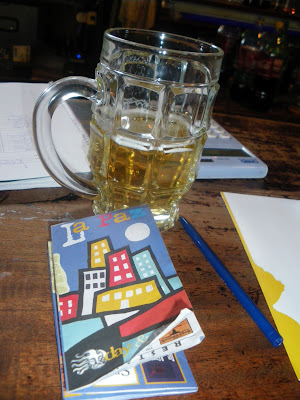 My map of La Paz, my ice cold Pacena in a pint glass and making notes on my trip so far! 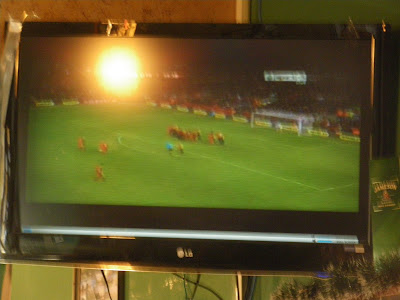 The football was also on, with Liverpool playing live. The match was live as this was mid afternoon when I had popped in, and the UK would have been a few hours ahead. It was a European game against Utrecht, and I met a girl from Dublin also in there who was wearing a Liverpool shirt and supporting the reds. 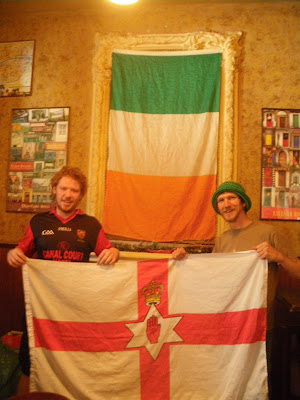 There was an Irish Tricolour flag on the wall so Grant and I posed with my Northern Ireland flag in front of it. This was a pleasing moment actually and proof that aside from all that rivalry and hatred back home, we’re all Irishmen, some with Unionist and some with Nationalist beliefs. Of course, politics aside this was actually just a proud wee moment! And it remains the only photo I have in South America of another person from Northern Ireland holding that flag. 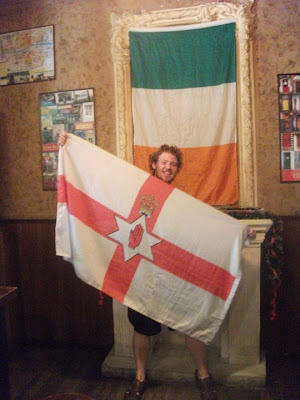 Grant got into the action himself. It was a surreal moment. Here inside the world’s highest Irish Pub! 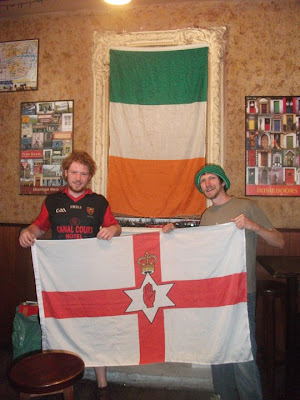 Another photo of Grant and I. Grant was a top lad and even had his iPod/iTunes connected to the bar dukebox so we cranked on the tunes for the next hour or so. We played Ash, Oasis, Van Morrison and of course The Wild Rover itself. I also met Jack from Tipperary who was working there and I chatted to him about the possibility of some work. Sadly I was already planning to move on, to do the Inca Trail and head northwards after Bolivia, so the chance passed me by on that occassion. But who knows in the future! I’ve worked in an Irish Pub in 3 continents, a fourth would be nice! 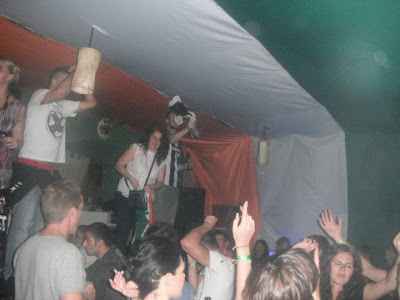 I’ve borrowed a few photos from Grant that show the pure madness of The Wild Rover. Not only is it the highest Irish Pub on the planet, but it’s a pretty lively, crazy Irish Pub too. Dancing on the tables and bar, mild nudity, fancy dress, pouring bottles down your neck. This is a place to forget how high up you are, forget the outside world and leave your inhibitions at home. Party hard! 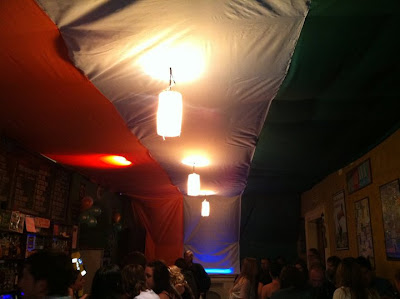 The above couple of photos are from St. Patrick’s Day, a massive Irish flag covered the walls and ceiling of the bar. 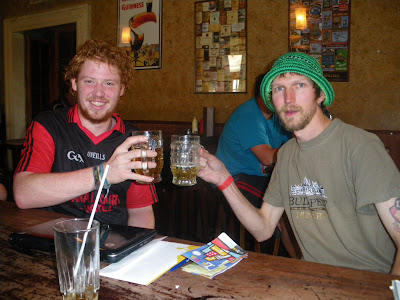 Cheers and Slainte with Grant, the sublime experience of having a Bolivian beer at some 3,660 metres above sea level. Amazing. It wasn’t a Guinness – a Pacena would have to do… 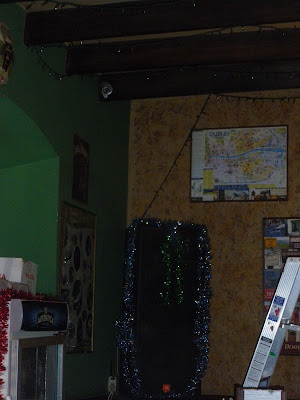 Christmas Decorations were getting put up. 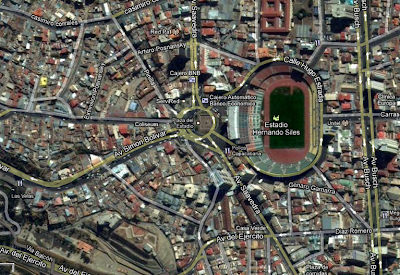 Now the thing was, earlier that day I had set off on a lone quest during La Paz rush hour and succeeded in one of my dreams. Sneaking in illegally to actually stand on the pitch at Estadio Hernando Siles, the HIGHEST National Football Stadium in the world, a famous place where Bolivia often whopp other teams due to their inability to cope with the high altitude, I actually wrote about it a while back… http://jonnyscottblair.blogspot.hk/2011/02/estadio-hernando-siles-la-paz-highest.html 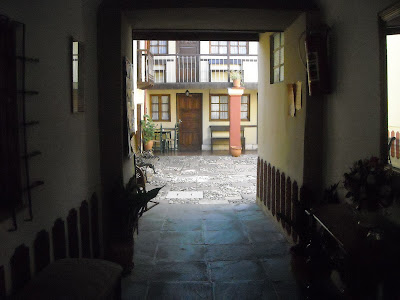 The entrance to the world’s highest Irish Pub is actually like this – into a courtyard then you go up the stairs! It’s hidden shyly, and it’s part of the hostel, but you do not need to be staying in the hostel to drink there, nobody was checking on the way in. 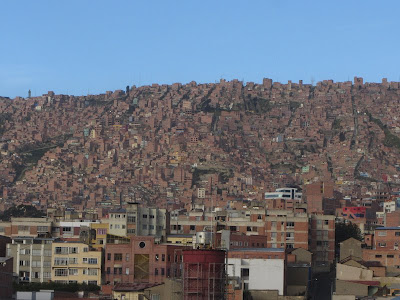 Just to remind you how crazy La Paz actually is, here’s another photo of the city itself. nestled on a street somewhere in there, built high up into the mountains is the Wild Rover! Incidentally I make a habit of visiting Irish Pubs. I’ve been in at least one Irish Pub per continent by now, worked in an Irish Pub in 3 continents, been to Ireland’s Highest Pub (The Ponderosa) and been the the world’s most southern Irish Pub (in Ushuaia).

The home page of the Wild Rover. 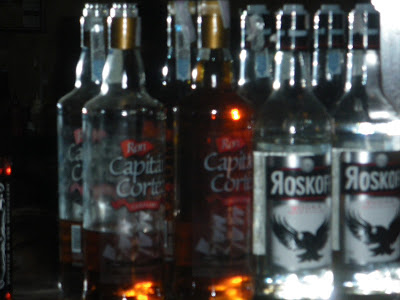 Rum (Ron) and Vodka. Cheap brands, and mostly made locally, this is a place to neck spirits. 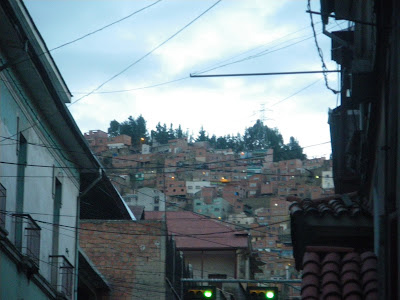 And the view from the street which houses the world’s highest Irish Pub. My wee trip there was incredible. Loved every minute of it and would dearly love to go back. A big thanks to Granty too for being an excellent barman, a great host and good craic!
Top of the world to ye!
Website – http://www.wildroverhostels.com/
What – The Wild Rover
Where – Comercio Street 1476, Zona Central, La Paz, BOLIVIA
Why – Because the craic is great, and it’s the highest Irish Pub on the planet
Beer Tried – Pacena and Bock
Altitude – 3,600 metres above sea level and rising
Nationalities Met – Northern Irish, Irish, English, Australian
Strange Currencies – Bolivianos and Centavos
Transport Used – I walked! I was only staying round the corner!
With Thanks To – Grant McParland
Directions –
Calle Comercio 1476,
La Paz, Bolivia
International   (591)2 2116903
Local     2116903
lapaz@wildroverhostels.com
We are located 2 and half blocks from Plaza Murillo where the presidential palace is located and 4 blocks from the cities main avenue El Prado. Just tell your taxi “Calle Comercio 1476, entre Loyaza y Bueno”
Key Songs –
THE WILD ROVER! (WHAT ELSE?):
…and as a hidden track…ASH- GOLDFINGER:
My Videos –
THE MADNESS OF LA PAZ FROM MY HOSTEL BALCONY:
MY VIDEO WITH GRANT AT THE WILD ROVER, THE WORLD’S HIGHEST IRISH PUB:
FLYING INTO LA PAZ:

8 thoughts on “Thirsty Thursdays: The Wild Rover, La Paz: The Highest Irish Pub in the World!”