“My Mum has gone to Iceland” – Bennett. 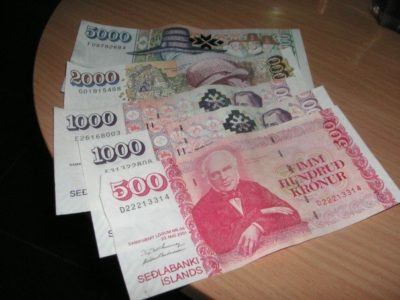 I think the indie pop band actually meant the shop called Iceland, but of course I’m here to write about travel, yet when I was backpacking through Iceland, I couldn’t help but hum that tune. A song which was released way back in 1997 would you believe! Most tourists to Iceland will arrive into the main airport and head directly to Reykjavik, the charming capital city. It is also, the world’s most northerly capital city as I mentioned in a blog post before. 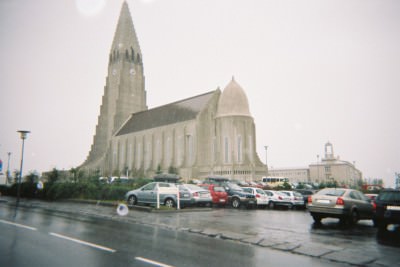 However, as a tourist in Iceland, it’s important to escape the capital city and tour the beautiful countryside. Most people agree that Iceland is one of the nicest countries in the world and I’d have to agree with that. It offers stunning scenery, endless wilderness, friendly people and diverse tourist sights. The world famous “Golden Circle” tour seems to encompass a lot of the sights together as a package in one or two days and that is a great way to see the country on the cheap. As is hiring a car, the roads are pretty deserted so it makes it easy enough to drive around Iceland! The country isn’t so cheap as it’s remote so bring plenty of cash! These were my top 5 things to check out, away from the capital. 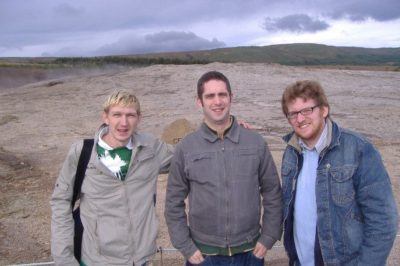 1.Pingvellir/Thingvellir
While loads of tourists love to whackpack the natural sights, Thingvellir is the place where the basics for the country’s existence began. The nation was formed at this incredible National Park area called Thingvellir. 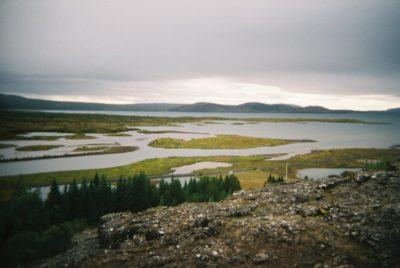 The entire place is a World Heritage Site, with gorgeous landscapes everywhere. Thingvellir was a meeting place for everyone in Iceland, laying the foundation for the language and literature that have been a prominent part of people’s lives right up to the present day.

2.Geysir
The word “geyser” in London cockney refers to a clever gentleman. But here in Iceland, this is a natural hot spring of water shooting out from the ground naturally. The whole country of Iceland is full of volcanic activity and hence geysirs are formed. 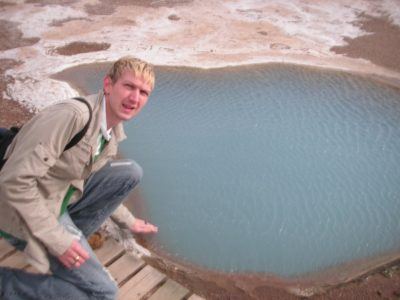 Hot pools near the Geysir, Iceland

The biggest geysir is simply called Geysir, often referred to as the Great Geysir.

3.Blue Lagoon
Probably the most touristic spot on the island. Everyone wants to swim in the Blue Lagoon and get their photo taken. It is a perfect place to relax and have natural hot springs and mud on your body as a cleansing method. 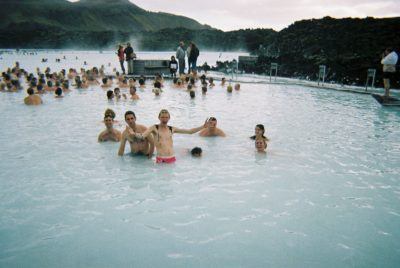 Enjoying the Blue Lagoon in Iceland

For my friends and I, the trip to the Blue Lagoon was memorable for a different reason. I had no swimming trunks with me on this trip, and although I went naked in Finland and Antarctica, you have to cover up in Iceland. So this meant I had to buy and wear the only pair of pants available at late notice! They were tight pink, women’s pants which meant embarrassment all round. Of course, for me, it was better to be able to say I have been to the Blue Lagoon than not, right? Here’s the full story of the time I wore pink panties to the Blue Lagoon! 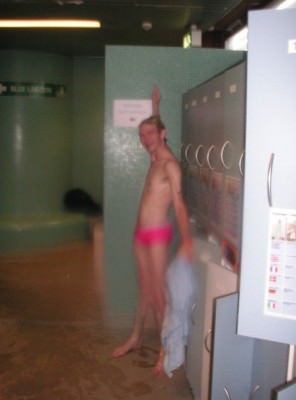 4.Gullfoss
Gulfoss is a must see and should make any top 5 for Iceland AND any top 5 list of waterfalls in the world. It is that stunning. As a man who has backpacked past over 30 waterfalls on my travels, this one remains one of the wildest, craziest and most mind blowing. 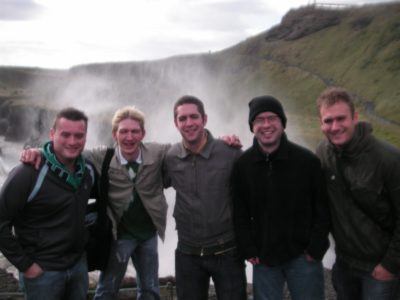 The lads and I at Gullfoss – Owen, me, Michael, Gavin, John.

It was a breath taking moment on the windiest day in September when my friends and I walked by Gullfoss. Along with Gullfoss, I also loved the Iguazu Falls (Argentina to Brazil border), the incredible Kaieteur Falls (Guyana) and the Nine Dragons Falls at Jiulong (China). 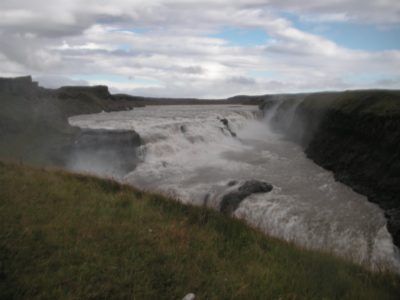 5.Keflavik
An unusual addition to this list perhaps, is the city of Keflavik. I ended up in here for my last two nights and it had a really different vibe to the capital city. By 2am, there were only 2 bars open, it was freezing and deserted but the music was good and the beer flowed. However this was one mistake on my travels I made. 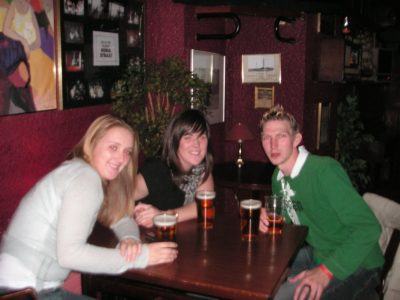 Night out in Keflavik with Beth and Una

I was only meant to stay in Keflavik for one night, but ended up doing two nights here as I stupidly slept in and missed my flight. To date, that is the only time on my travels where I missed my flight! Thanks to Una and Beth for letting me stay with them and for some good nights out in the town they were living in.

So with these five awesome things to do, get yourself over to Iceland for a spot of raw travel, and if you have time, I also recommend the stunning Faroe Islands too.