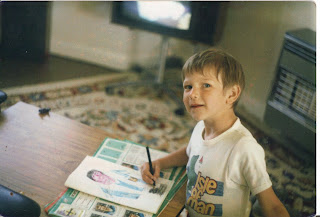 Drawing Maradona and Other Things in 1986

In many ways, the 1980s were the best decade ever!! I love looking back 20 odd years at those photos, and this one here, in particular encapsulates the sort of Jonny Blair I was and always have been. Plus the furniture, the style, the fashion and the era of the 1980s is fantastic. For the next few hundred words, you are in 1986! I am living in Marlo, Bangor, Northern Ireland. I have a lot of family near me, my parents Muriel and Joe, plus my baby twin sister and brother Marko and Cathy. I have my wonderful grandparents Mattie (Granny Scott) who lived in the Bloomfield Estate in Bangor in a lovely wee house on the corner next to some grass where you weren’t allowed to play football. Then there was the thrill of Belfast, and where most of my family lived or were from. Belfast always feels like home, it’s seeing the people, the road signs, getting off that aeroplane. It’s an amazing city. You take your mind and you forget we have trouble and violence, and you forget all these people died and got injured, OK, because that’s history. That’s like Israel/Palestine, Iraq, Falklands, in fact any sort of conflict in any country. We’ve all experienced some of that. In 1986 we enjoyed life, quite frankly because there is nothing else. I have some photos of my family up there, my Great Granny and my Great Granda both pictured with me in those photos. John and Annie Mawhinney. John died in 1992, Annie waited until 2005, when she was almost 100. They lived and enjoyed the growth and change in Belfast all their lives. I have my life because my family and my parents made it for me. They worked bloody hard for that. It was 1986. Northern Ireland were in the World Cup. My Dad bought me the newspaper pull out from the Belfast Telegraph. I still have it. My Dad bought me a Northern Ireland football scarf. My Mum and Dad bought me a Panini sticker book (which I completed and later lost somehow…). I loved Norman Whiteside and Maradona. I was only 6, but I watched the FIFA World Cup. 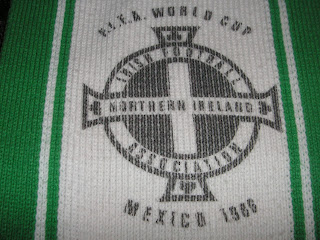 That photo of me, I’m six, I have my Panini Sticker Book open at the Northern Ireland squad. I knew all their names, aged 6. I was drawing Maradona. You watch the video of the 1986 World Cup, especially the Argentina v. Italy and Belgium matches and you watch the genius that was DIEGO ARMANDO MARADONA. He was easily the best player in the world for that generation, and except for Zinedine Zidane and Cristiano Ronaldo, we haven’t seen anything like him since. Yes, really, Maradona was that good. What else happened in 1986? I was in P2 at Kilmaine Primary School, taught by Mrs. Bell in a downstairs room. Bombs in Belfast were very common. The US Space Shuttle Challenger Exploded. US Fillims (sorry, movies, or films…) were big time, especially Top Gun, Crocodile Dundee and the excellent “Ferris Bueller’s Day Off”. My main friends back then were Graham Irwin, Mark McCullough and Peter “Magoo” McIvor, all of whom lived very close and we would meet up and play Lego, or football. I also hung out in the street with David Gherardi and Gareth “Robbo” or “Coco” Robinson. And then there was the lovely Claire McKee, the girl who my Mum minded, probably the first time I ever fancied a girl you know. The Summer we spent some days at Cloughy caravan park, or even better Portballintrae up on the north coast of Northern Ireland. And on this particular year, we even ventured “across the water”, my family had enough money to take us to Devon and Hampshire in England for a 2 week holiday, where I noticed the “foreign” English accents for the first time, and found them very funny, even though TV in Northern Ireland was English BBC. 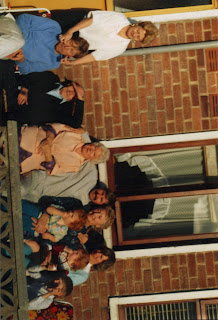 We spent some time in Bideford in north Devon, and also visited my Mum’s cousin, Henry in Salisbury, where we stayed at his massive house, and visited the Cathedral and I played football in the park by it. Its all so old and dates, but as Metallica once said “the memory remains.” I do remember these days, but perhaps having some photos reinforces this memory. My holiday in 1986 was the trip to England via Scotland. We had a silver Datsun car, and we got the Sealink ferry boats “Galloway Princess” and “St. David” from Larne (Northern Ireland) to Stranraer (Scotland). In terms of lifestyle, Mum used to cook really nice food, sometimes I was fussy and didn’t eat it all. Mind you this has changed over time, and I now eat pretty much anything (EXCEPT mushrooms and peas!). Dad was always at work, in Belfast for British Telecom. I used to get a bit worried sometimes watching the news of the bombs and wondering where he was. 1986 carpet and fashion was also brilliant. Our carpets were mainly brown, drab and boring, yet in truth much nicer than anything from today. Those photos show the time. I often dressed in dungarees and ridiculous sweaters. Anything and everything. My hairstyle was vintage Ringo Starr style from the Beatles. Probably modelled on my Dad, I don’t know. I also owned a “bike” and had learned to cycle, I don’t even do that now. I’ll have to search out some more lovely photos from 1986 some time and see what life was really about. All I know is I must have enjoyed it… 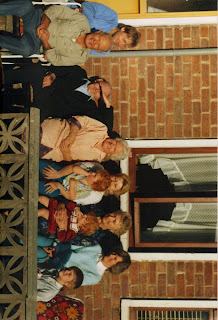 WHITESIDE, AND NORTHERN IRELAND IN THE WORLD CUP, MEXICO 1986: