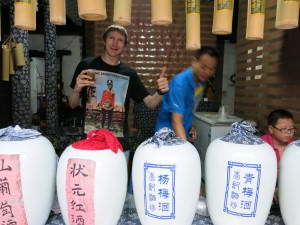 Last week it was time for some peach wine, Chinese style. I found myself touring the Jiangxi Province in China and we arrived at an old style village called Xiaoqi. Itself, enough to hold my interest for its very name. How many cities in the world boast an X and a Q in its name? Can’t be that many…I wonder if it would pass for a word in Scrabble. Anyhow on my walk around Xiaoqi, there was a local shop selling Chinese wine! I had to try some. 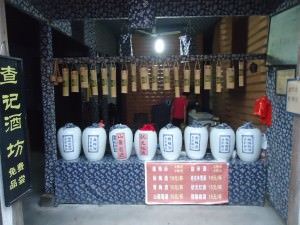 You wouldn’t really know it was a shop selling wine. Almost everything in Xiaoqi is written in only Chinese and indeed no English was present at this wine shop. My girlfriend Panny said they are selling wine here and asked if I wanted some. Of course! I was straight in. There were a few different varieties of wine available and the one I opted for was 15 RMB for a glass and was peach. I initially thought it was only 5RMB, but it seems that was the cheaper one – I must have expensive taste in wine, though 15RMB is still only about $2 US for a glass of wine. The guy selling it was very friendly and even let me go inside and pose for photos with him. 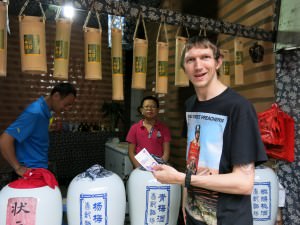 Buying some peach wine in the obscure village of Xiaoqi, Jiangxi Province, China.

As I sipped the Peach Wine in this random remote village of Xiaoqi it felt like another special travel memory already. Orangey in colour and fruity in taste, this was one of the finest wines I’d had in ages. And I don’t just say that to make everything sound good! I loved it. 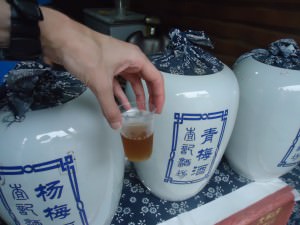 My glass of peach wine and the massive cask where it came from in Xiaoqi!

Of course the opportunity is always there to buy more to take away with you, but I’m a tight traveller money wise and I passed on that, continuing my walk through Xiaoqi and finishing my peach wine as I strolled through the city’s charming streets…and even into the forested area on the edge of the pretty village! 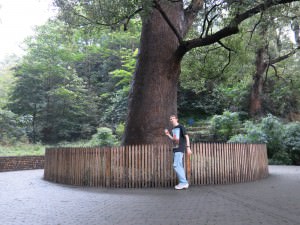 Walking round a tree in the forest part of Xiaoqi with my peach wine.

If you ever end up in remote villages like Xiaoqi and are faced with the chance to try something local and special, you’d be a fool to pass the opportunity down. Happy drinking on your thirsty Thursdays my friends!