I met Graham Askey in the Why Not Hostel in Tbilisi Georgia in 2013. His type of travel intrigued me and he is a man I have a great deal of respect for. He avoids the obvious backpacking scene and gets to the heart of alternative destinations, some of which are torn apart by war or poverty. Graham’s stories from Africa are fascinating and he shares his tales on Inside Other Places. I also recently included Graham on my post on backpacking to Agdam in Nagorno Karabakh as Graham gave me some tips ahead of my trip there. 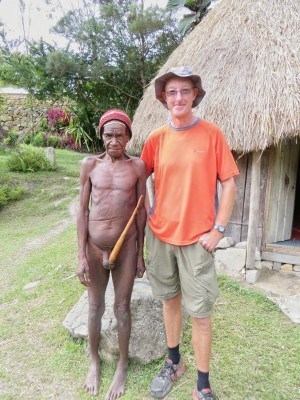 Who are you?
I am a former builder who has decided that there are better things in life than working for a living and before I get too old and decrepit it would be nice to get a better understanding of life in other places, particularly regions where the culture is markedly different to our own. Because of this I have developed a love for traipsing around squalid third world dictatorships and dysfunctional authoritarian regimes.

Where are you from?
Brighton, England

Where have you been?
About 65 countries, predominantly Europe, Africa, Central and Southern Asia.

Where are you now?
Back home for a few weeks to give my friends the impression I still love them despite having been away for fourteen months and am itching to get going again. 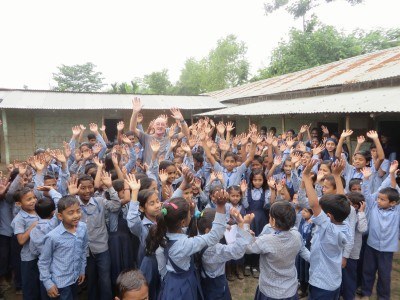 World Travellers: Graham Askey inside Other Places at a rural school in India

What are the top 3 places you’ve visited?
I find it difficult to rank places which each offer, often totally different experiences but
– Iran would have to be in there for its variety of culture, history and geography with such great hospitality;
– Bangladesh for its incredible friendliness;
– after which it’s a toss up between Tajikistan or the Sahara Desert for the scenery prize. No coincidence that they are all Muslim countries, where a culture of welcome for strangers is engrained into life and religion.
What is the best travel experience you’ve had?
Comparing wildly differing experiences is problematic, how can I choose between: dancing on a rooftop to illegal Iranian pop music in the city of Bam, looking out at the moonlit ruins of the city destroyed by an earthquake; the majestic, icy beauty of the mountains crossing the Pamir Highway or that blow job in a cheap hotel in the Ivory Coast. All equally wonderdful but utterly distinct. If obliged to choose it would be the opportunity I had to do something genuinely decent for someone else. I made friends with a young man in Benin, West Africa, who later explained that he really wanted to go to the Ivory Coast to search for his mother and sister who he and two siblings had been separated from at the age of eight, when his ill father had to return home to Benin and then died. However he had neither the time or money to undertake such an adventure. So I promised to do what I could and several weeks later I found myself in a small Ivorian town putting up posters with his family details asking if anyone had any information. After three days and accompanied by a helpful tribal chief I followed up a lead to a little village at the end of a long dirt track where we found his uncle, aunt and grandmother and I was able to put my friend in touch with his mother. If I can be proud of one thing in my life it is that I had managed to reunite a family who had been separated for eighteen years and in all likelihood would have remained so. The blow job was just the icing on the cake. The experience taught me that we can use our relative wealth to help people in ways far more important than simply giving money. 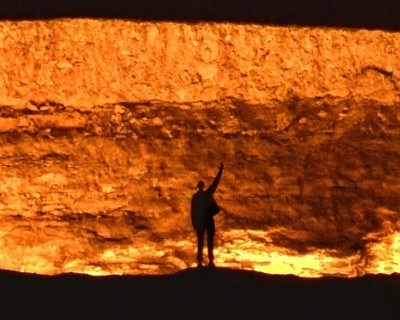 What is the worst travel experience you’ve had?
Without doubt catching a parasitic infection in Liberia, by the time I got to Ghana I ended up so sick and dehydrated I had to be put on a drip in a clinic and the final indignity of waking in the middle of the night to realise I had shat myself in my sleep. (Well you did ask!)
What is the funniest travel experience you’ve had?
The most recent one that springs to mind was waiting with a Bengali friend outside a community centre in Chittagong in Bangladesh to meet a guy we had talked to on the train and we were enthusiastically ushered in to the wedding that was going on and fed a sumptuous banquet, after which we discovered we were at entirely the wrong venue and had no connection with the wedding. When we finally got to the right place, where there was also a wedding going on and our acquaintance was the drummer in the band. Unencumbered by anything resembling talent I hit the dancefloor only to discover that my demented gyrations rocked the party big style and everyone went ballistic in response. 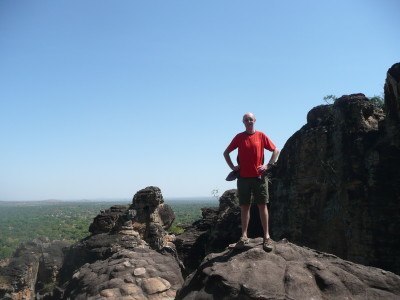 World Travellers: Graham Askey from Inside Other Places in Mali

What is the scariest travel experience you’ve had?
I have been fortunate enough to not get into any totally pant soiling situations and I have a defense mechanism which often leaves me slightly unnerved when I probably ought to be more scared, however Bujumbura (the capital of Burundi) was particularly dodgy at night as even the night club bouncers carry AK47’s. As for Goma in the Congo I didnt even risk staying the night. The standards of driving around much of the world are the scariest thing, I’ve lost count of the number of times we’ve been on the wrong side of the road with some other vehicle hurtling towards us, while the driver is chatting on his mobile. One particularly memorable journey on a bus in Georgia we overtook an ambulance that had its lights flashing, racing to get to an accident, as it was deemed to be going too slow – we raced past the accident long before the ambulance got there.
What is the most random job you have had on your travels?
An hour before my Rwandan friend’s wedding in Kigali I learnt I was to be a joint best man in the traditional ceremony.
How do you fund your travels?
In the past I have worked and saved like most people but now I rent out my house to pay for it.
What 3 tips would you give a new traveller before they set off on their adventure?
1. Learn some of the language, even if its just the basics. I am constantly amazed by how bone idle many travelers are, anyone can pick up ten words or expressions very quickly – the Memrise app has great little courses for just about every language. Its not just a matter of politeness, people always appreciate it and it can open doors into other people’s lives.
2. In every country stay in at least one place that is not in the guide book or on Trip Advisor etc. These places are often more friendly than elsewhere or at least more curious. Once you have learned some of the language, even if its only, ”hello, how are you”, walk down back streets and talk to people. You will gain a far better insight into a culture than walking round monuments and star attractions.
3. Take every opportunity you can to speak to local people, even if it’s just asking for the toilet. It will improve your communication skills, give you the confidence to make mistakes and so learn but, more importantly it creates chances of making a real connection with people. It is these personal experiences that you will treasure the most in the long term, you can even make new friends, as I have done on occasions.
What are your future travel plans?
A couple of months in Ukraine and the Balkans before studying Arabic for a bit in Egypt and then traveling around the parts of the Arab world that aren’t shooting at each other or being bombed by us.
Follow Graham’s Adventures:
Graham Askey http://insideotherplaces.com (follow via Facebook, email etc from blog website)
Twitter @graham_askey

Thanks to Graham for being the latest in my series of World Travellers! If you travel the world and run a travel blog or are a travel writer, please get in touch, you can be featured (there’s a slight waiting list at present), either e-mail jonny (at) dontstopliving (dot) net or head to my contacts page and get connected! You can also subscribe to Don’t Stop Living by filling in the form below! Safe travels!

1 thought on “World Travellers: Graham Askey From Inside Other Places”