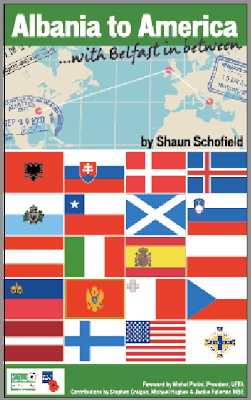 The first thing to say here is obviously if you like Northern Irish football then this is a must buy! Shaun Schofield is a crazy football fan, a seasoned traveller, a man with endless passion for life, and most admirably of all: he is a very nice person. I had heard about Shaun Schofield many times before I had actually met him. 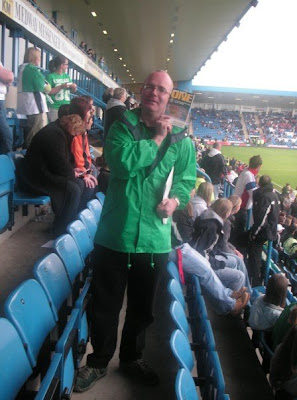 Possibly the first time I was to hear about Shaun “with an h” Schofield was in 1997 when selling our “Here We Go…Again” fanzine, as Shaun had started writing for “There’s A Wee Spot In Europe” (another Northern Ireland fanzine at the time, which later became known as “Our Wee Country”). 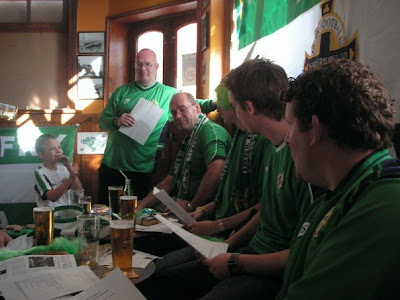 IT wasn’t until a Northern Ireland supporters club meeting in Manchester in 2006 that I actually met Shaun and was properly introduced (Though I have memories of selling him a fanzine once, in days gone by). 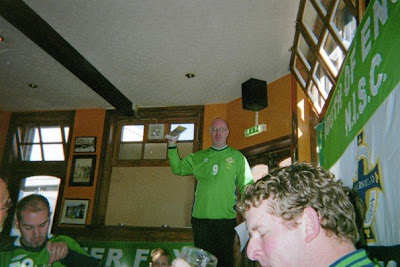 Dressed ridiculously in green, Shaun is a man of surprises. He has lived the high life of mixing work with following Northern Ireland in FOUR different continents (only Africa and Oceania remain elusive and we’ve yet to play there after 1980…) over a period of 17 years. Furthermore and most impressive of all, he hasn’t missed a single Northern Ireland match home or away since 1995. Fifteen years is some dedication. And given that I claim to be a crazy football fan, this is an achievement which I will never achieve in my lifetime (13 consecutive years of attending every home match at Windsor Park came to an end for me about a year ago…). 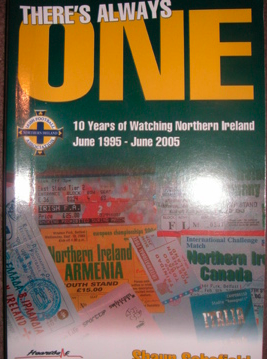 Shaun decided to write a book on his adventures from 1995 – 2005, donating all proceeds to Heart Beat and Action Cancer. The front cover of his excellent first book, “There’s Always One” is pictured above. It includes a detailed account of all those away trips to places such as Azerbaijan and Thailand to watch Northern Ireland draw both matches 0-0…This new book, Albania to America threatens to be even better, wiping any other current football fan’s book into oblivion. Including the famous 1-0 win over England back in 2005, David Healy’s breathtaking hat-trick over current European and World Champions Spain, the last 5 years of watching Northern Ireland have been sensational. Shaun mixes his own life’s thoughts with a passion for travel, mixing with different cultures and more importantly supporting the Northern Ireland football team, which surely this time “is on the eve of a golden age…”, well perhaps… 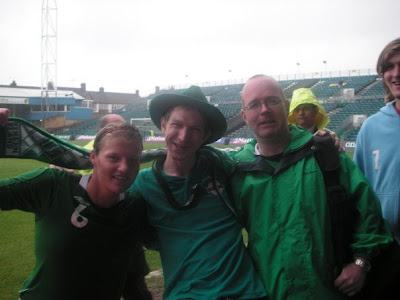 Shaun and me there with Ashley Hutton, current captain of the Northern Ireland ladies football team. That photo was taken on a wet day at Gillingham, Kent back in May 2007. We lost 4-0 but sang our hearts out. 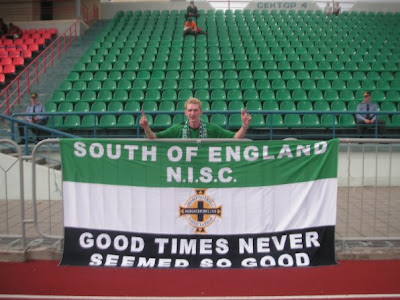 Since meeting Shaun for the first time, we’ve kept in regular contact and indeed had many a meet up in a few different countries. In August 2007, Shaun had hoped to come all the way to Belarus with me to watch the Northern Ireland ladies play in a city called Bobruisk. Unfortunately Shaun couldn’t make it, therefore I went alone to the match and indeed wrote a full report on the trip. This report has been condensed and edited and I am now proud to say it makes up a chapter in Shaun’s new book “Albania to America (With Belfast In Between).” 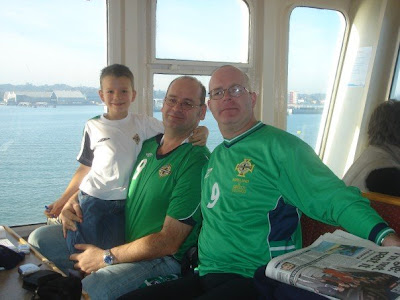 Shaun with Marshall Gillespie, journalist on a boat trip to the Isle of Wight in 2006. Shaun was a special guest of the SOENISC for the day. 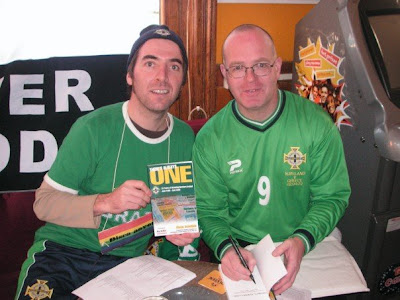 Shaun signs a copy of his book for rock star Scott Gordon in the Painter’s Arms, Isle of Wight at that very meeting. 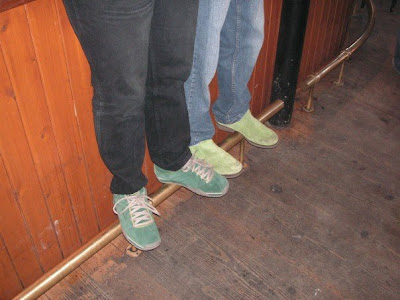 Shaun and I compare each other’s green shoes at the same meeting. 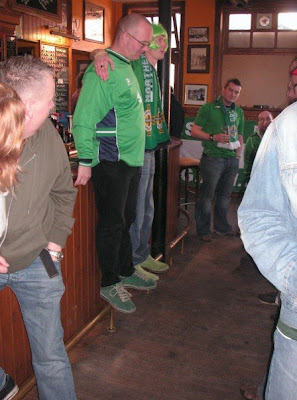 Shaun’s shoes were better, as was voted by the SOENISC massive. 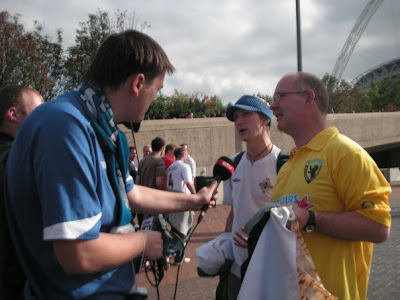 Shaun and I went to watch and support Estonia back in 2007 when they lost 3-0 at Wembley to England. Here, Shaun and I were inteviewed by Estonian National Television. An interview which I never saw… 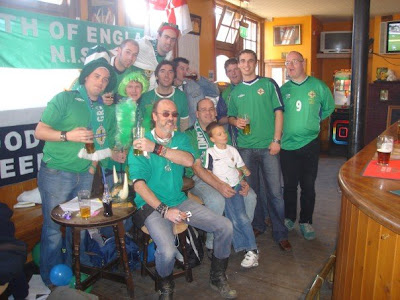 So with Shaun busy writing his second book, I typed up my chapter on Belarus and a couple of years later I left and ended up in Australia. I haven’t seen Shaun or Northern Ireland for over a year now, but I cannot wait to buy the new book. If you like football, BUY IT. If you like Northern Ireland, BUY IT. If you want a fascinating story of following a national football team all over the world over a period of 5 years, go and buy it. 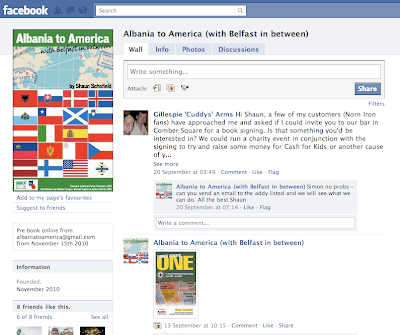 IT only costs £10, plus postage and packing, or arrange to meet Shaun himself and get the story from the horses mouth. Shaun will be doing a few guest appearances, book signings etc in places such as a pub in Comber, Bangor NISC meeting, SOE NISC meeting and many more to be announced. Shaun Schofield is a man with a rare passion. Shaun Schofield is a gentleman.
Please support a good cause. You can e-mail Shaun Schofield, the Author, here: E-mail Shaun
[email protected] and join up to the Facebook Group:
Albania To America Facebook Page

Book written by Shaun Schofield detailing the last 5 years of watching Northern Ireland play football Internationally. He’s not missed a game for over 15 years – home or away!


All of the profits go to NI charities.

To bring a smile to the faces of football and travel fans everywhere whilst raising money for NI charities and having a good time!

Paperback book:
“Albania to America…with Belfast in between”


E – book:
“There’s Always One” for those who missed out first time around.