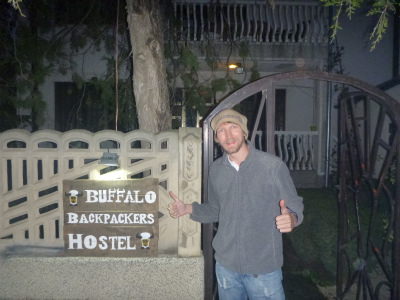 After travelling in Northern Macedonia, it was an obvious move to take the easy border bus north to Kosovo. The buses depart from Skopje in Northern Macedonia and within two hours you are in Pristina the capital city of Kosovo. I checked into the cool Buffalo Backpackers there and as well as drinking in 5 cool bars in Pristina, I did a full day of sightseeing in the capital. Here are my personal top 12 things to see and do while backpacking in Kosovo’s capital, obviously this is just touching on the surface but a good start. 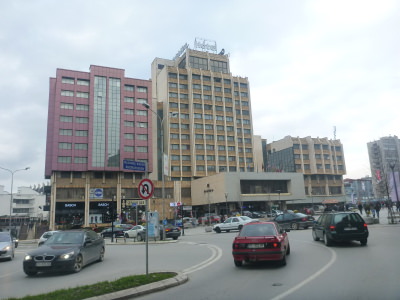 1. Bill Clinton Statue
If you don’t know your history of Kosovo, read up on it. You’ll get to know how much of a hero Bill Clinton is in these parts. He saved people’s lives and the people of Kosovo are forever grateful to Bill who is a national hero. He has a street named after him, Bill Clinton Boulevard and on that very Boulevard is a statue of Bill Clinton himself. 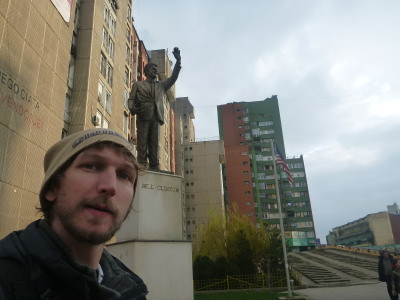 2. Kosovo Museum
It’s essential to understand where you are when you are here. I’ll always encourage other travellers to visit ex-war zones as it just makes the world a better place to me. If people can go there and meet the people and get an understanding of what happened then it can only be a good thing for the future. For the same reason why I backpacked through Iraq, Nagorno Karabakh and Northern Ireland. 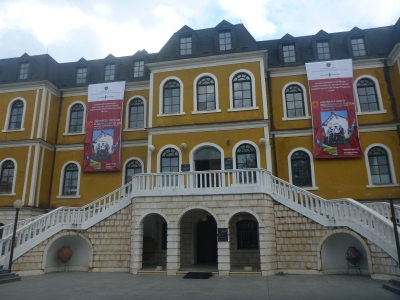 Growing up in Northern Ireland in the bad old days always made me eager to witness other parts of the world affected by man’s inhumanity to man for political/religious/geographical reasons. The Kosovo Museum serves as a horrific but necessary insight into the horrors that happened to Albanians under the rule of Slobodan Milosevic. 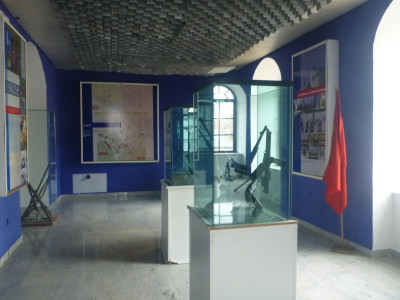 Inside the Kosovo Museum.

When I went it was a Sunday in November and was free entry. War weapons, stories and memories everywhere on the walls and in cabinets. 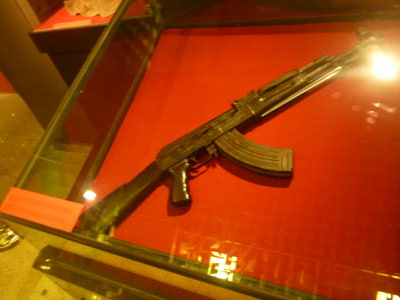 Weapons in the Kosovo museum.

3. Football Stadium
As a football nomad, I had to visit the National Football Stadium. At the time, Kosovo was not yet recognised by FIFA or UEFA but I saw the foresight and hoped they one day would be so I visited their national stadium. If you’re there during the season (March – October) you can get to watch a game – FC Pristina. 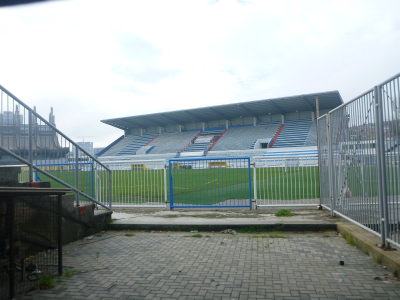 Some Kosovan footballers play for Cheatzerland (Switzerland) at present which is a shame. 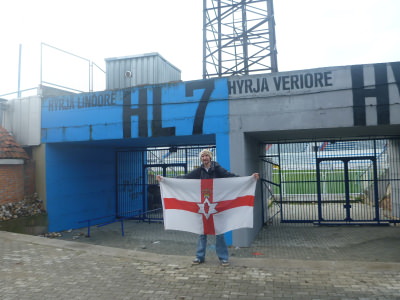 At the football stadium with my Northern Ireland flag.

4. Newborn Monument
Kosovo’s slogan is “Newborn”, the past had to be left behind and start afresh with the new country from 2008 onwards. There’s a simple monument, which is just the message of the word “NEWBORN”. As simple as it is – you’ll see loads of people from locals to tourists taking photos next to it, and yes I did the same 😉 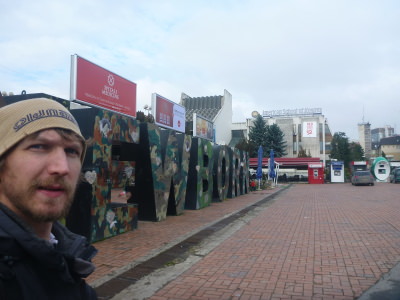 5. Christ the Saviour Cathedral
OK so once you get to understand the politics please don’t be baffled by churches in Kosovo. This is a Serbian church in what is a country of mostly Muslims and hence why it looks rather lonely and incomplete. I have no doubt that times will change though, it will be finished and hopefully one day everyone in this region will live in complete peace. 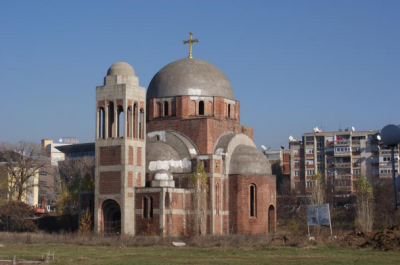 6. Monument of Brotherhood and Unity
Another of those monuments that has been erected in the city to show the times are moving on. It has three 15 metre high columns and is meant to represent unity between Albanians, Serbs and Montenegrins. 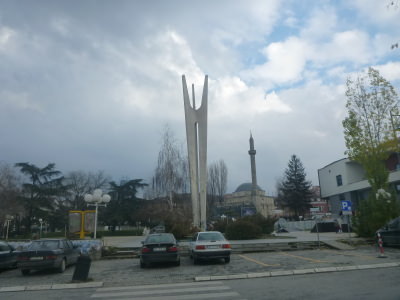 Monument of Brotherhood and Unity

7. Mother Teresa Statue
On your walk along the central boulevards there is a Mother Teresa statue. The lady herself was born just two hours south of here in Skopje, Macedonia and the memory lives on. 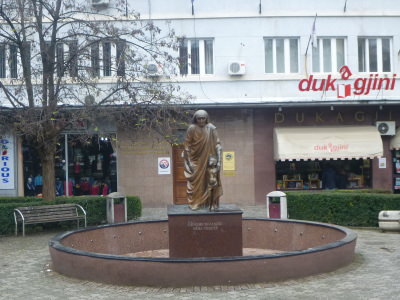 8. Assembly Building/Parliament
Basically as you stroll through the city centre of Pristina, you may nonchalantly pass the Assembly building without even noticing it. Reminded me of the time I visited the parliament buildings in Stepanakert, Nagorno Karabakh and in Tiraspol, Transnistria. 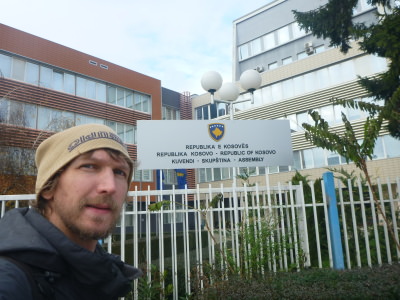 Outside the National Assembly of Kosovo.

9. Mother Teresa Cathedral
I’m putting in a second Cathedral here as the Mother Teresa one is more central and is an obvious landmark as you turn the corner from Billy Clinton Boulevard towards Georgie Bush Street. This is a Catholic Cathedral. 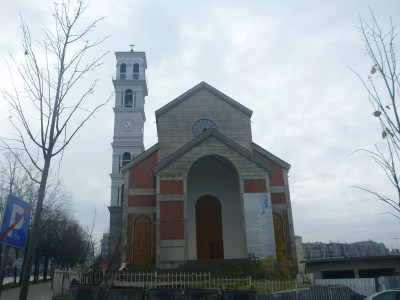 10. Mosques
Mosque wise, there are quite a few to choose from when backpacking and I checked out about 3 of them. The favourite being the Carshi Mosque below, which is undergoing reconstruction at present. 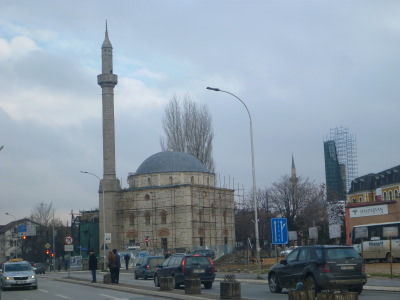 11. The Grand Hotel
This Hotel has some history similarly to the Europa Hotel in Belfast, Northern Ireland. Before the Kosovo War in 1999, the Grand Hotel was owned by the (then) Yugoslavian government. It’s owner now is Unio Commerce. 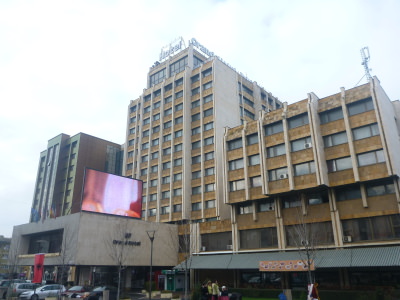 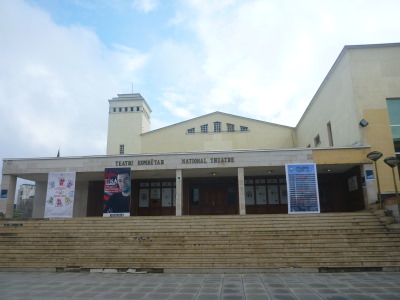 So the capital of Kosovo is an up and coming city with a torn past. It’s a very cool place at night for cafes, bars and restaurants and hopefully these 12 sights can get you started during the day time. As a final tip, head to Moving restaurant for an awesome FREE view of the city. 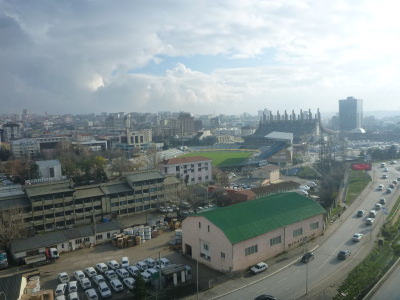 Here are some of my videos from backpacking in Kosovo:

13 thoughts on “Backpacking in Kosovo: Top 12 Sights in Pristina, the Capital City”