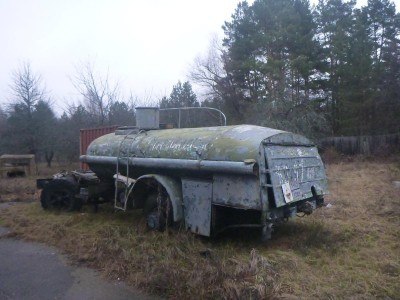 So in the fourth installment of my trip to the Chernobyl Exclusion Zone, I report on the journey driving down a Soviet built “road” through a dense forest to a radar system, often known as DUGA 1. This part of the tour seemed less relevant to Nuclear Power stations and much more relevant to the secret Soviet empire that outsiders knew little about. 29 years on, the secret is out boys, step in the Northern Irish travel blogger. 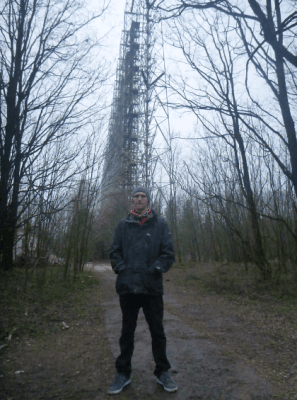 So after leaving Kiev, entering the CEZ at Dityatki Checkpoint and getting a tour of Chernobyl Town itself, we veered off the main road and onto a road built from concrete blocks. This was a custom built road through a forest, it was in a straight line but it was built in secret. It was built by the Soviets, to secretly hide a radar system, to be hidden from above. A radar system so meticulously planned and kept secret that outsiders and even aircraft flying overhead would know nothing about it. 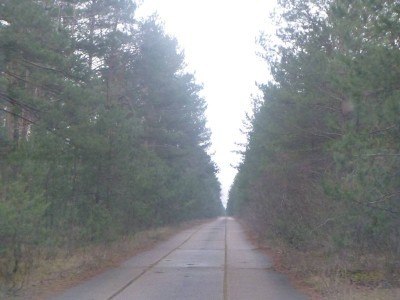 The road to the secret Duga Radar System

The radar system was tall and narrow and shoots up into the air as if it were part of the forest of trees. The construction of this was clever. No doubt the Soviet government employed hundreds of people to help in the building of this masterpiece. The first experimental system, Duga-1, was built outside Mykolaiv in Ukraine, successfully detecting rocket launches from Baikonur Cosmodrome at 2,500 kilometers. This was followed by the prototype Duga-2, built on the same site, which was able to track launches from the far east and submarines in the Pacific Ocean as the missiles flew towards Novaya Zemlya. Both of these radar systems were aimed east and were fairly low power, but with the concept proven, work began on an operational system. We visited the site of the Duga 1 and 2. It shoots out at you as you drive down the concrete highway. 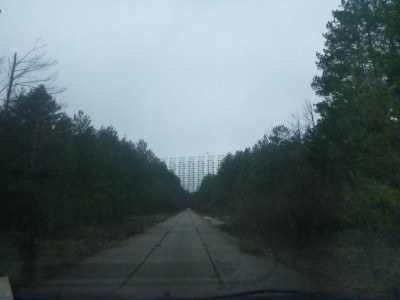 At the end of the secret concrete block highway sits the Duga Radar System. Got ya!

All this talk of spies and secretive missions in the Soviet Union is something you may have seen in James Bond films but you may never have realised that this shit really happened. It wasn’t just Roger Moore having a joke because he was British. No my friends, there was some devious shit going on here – the Cold War was colder than you think. You don’t construct 250 metre high radar systems to make a phone call. 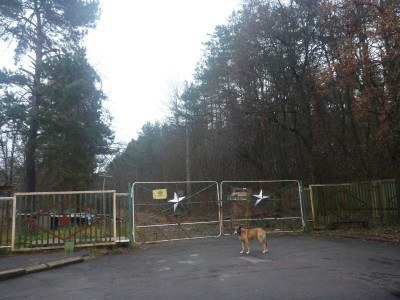 The Soviet Union constructed all types of military and nuclear bases throughout the “country” during their lengthy time as one nation (1922 – 1991). The Duga Radar systems are of course just one examples. Many similar constructions may well have never been found, and were possibly destroyed in the same way that Nazi Germans tried to cover up the horrors of death camps like Dachau and Auschwitz. 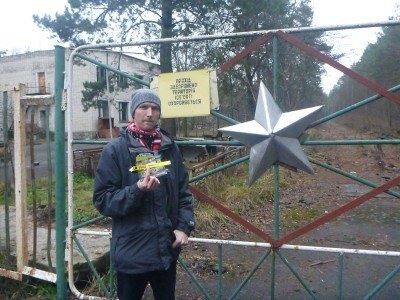 At the Gates near the Duga Radar in Chernobyl Exclusion Zone

This place appeared on maps as a school summer camp. Well from above, anyone would think it was – it had buildings, a playground, a football pitch and was in a countryside forest in Ukrainian SSR, near the Belarus border (then, there was no border – the whole place was the USSR). 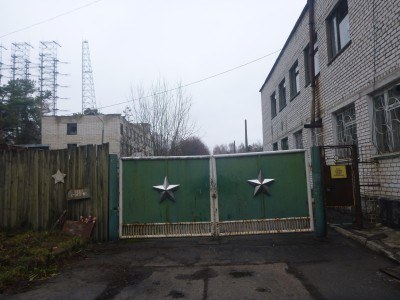 The gates and entrance to the Duga Radar site

We pull over somewhere in the forest and a building with gates guards the entrance. They are rusty green gates with silver stars on them. They are very distinctive. A vivid image really, that I won’t forget. A brace of stranded dogs dander around nonchalantly, they’re not really even guard dogs. One guy works here as a security guard. We are within the CEZ of course, so his shifts are monitored so that he doesn’t exceed the recommended doses of Radiation per year. 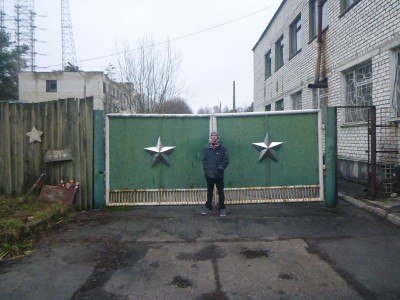 By the gates and entrance to the Duga Radar system.

We park by said green gate brace, they look decrepit and lonely. Beyond this, there are trucks, buildings, all sorts of ruins that have seen better days and will never again see days any better than that. This sort of shit… 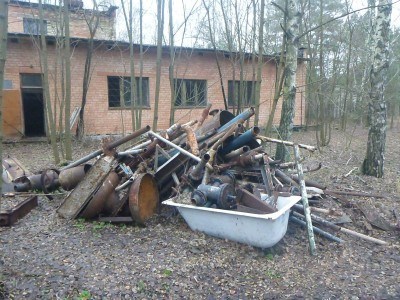 This sort of shit: pipes and a bath 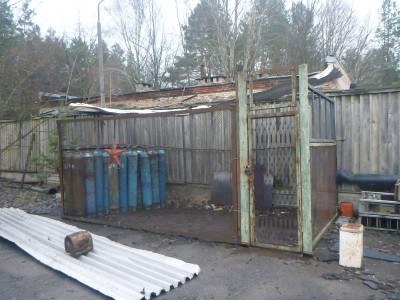 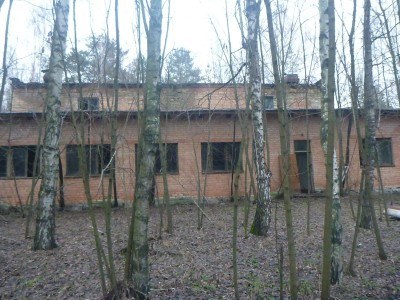 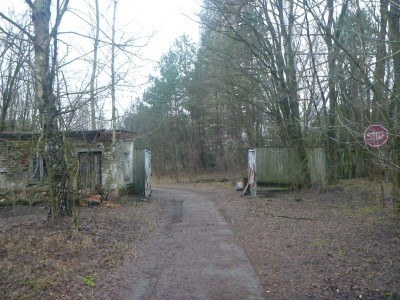 Walking to the radar system

The path to the radar system takes us past a football pitch (in ruins since the Dasaev days), a checkpoint and here, in this remote forest is one of three well planned and built Soviet Radar systems, these “Duga radars”. 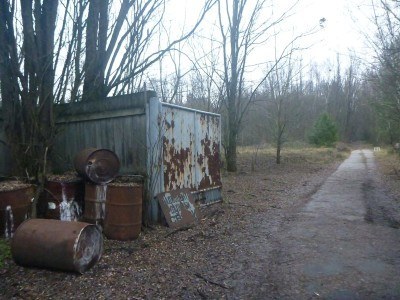 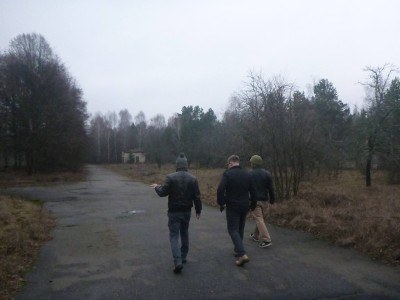 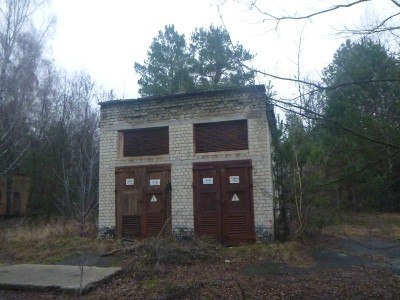 This is the only one of the three that still exists in its entirety. 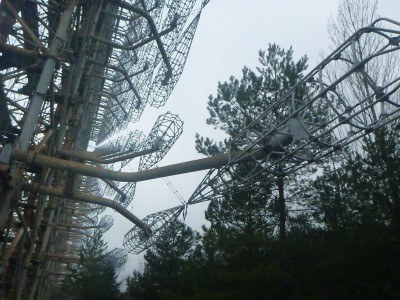 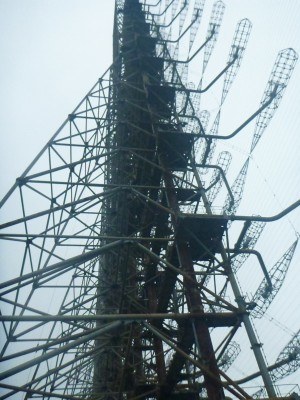 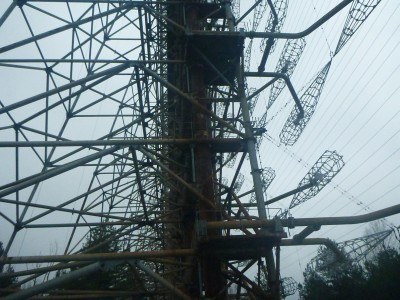 There is some confusion over what the radar was all about and personally, I think it was something to hide from the enemy to sense attacks and due to its suspicious proximity to Chernobyl, to plan nuclear attacks. Again, with each visit to the former Soviet Union I get more curious about the entire regime here. I’ve now been to the following parts of the former Soviet Union: Lithuania, Latvia, Republic of Uzupis, Estonia, Russia (Moscow only so far), Ukraine, Chernobyl Exclusion Zone, Belarus, Kazakhstan, Transnistria, Kyrgyzstan, Azerbaijan, Nagorno Karabakh, Armenia, Moldova, Georgia. 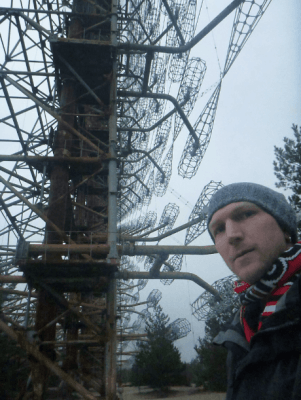 Beneath the duga radar system

Wikipedia comes out with this description of the Duga Radars:
Duga Russian: Дуга-1 (NATO reporting name Steel Yard) was a Soviet over-the-horizon (OTH) radar system used as part of the Soviet ABM early-warning network. The Duga Radar system operated from July 1976 to December 1989. Two operational Duga radars were deployed, one near Chernobyl (where I toured) and Chernihiv in the Ukraine, the other in eastern Siberia (which is partly destroyed). 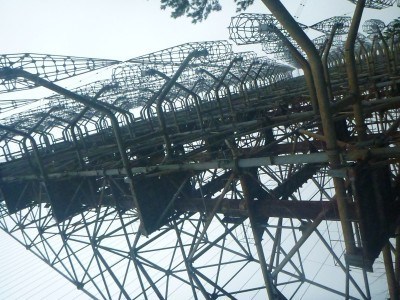 The Duga systems were extremely powerful, over 10 MW in some cases, and broadcast in the shortwave radio bands. They appeared without warning, sounding like a sharp, repetitive tapping noise at 10 Hz, which led to it being nicknamed by shortwave listeners the Russian Woodpecker. 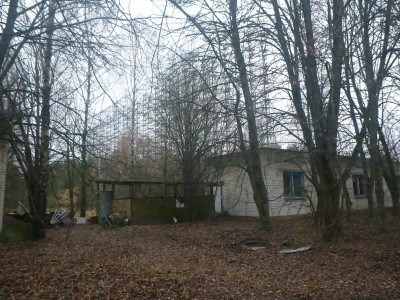 On the walk to the radars (viewable behind)

The random frequency hops created by the Duga Radars in the Soviet Union disrupted legitimate broadcast, amateur radio, commercial aviation communications, utility transmissions, and resulted in thousands of complaints by many countries worldwide. The signal became such a nuisance that some receivers such as amateur radios and televisions actually began including ‘Woodpecker Blankers’ in their design. 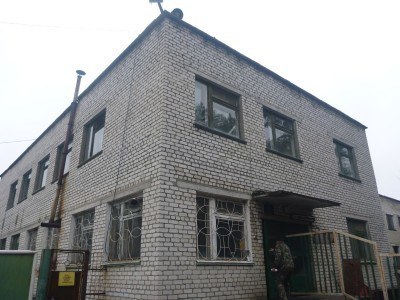 The checkpoint and entrance to the Duga radar system path

The unclaimed signal was a source for much speculation, giving rise to theories such as Soviet mind control and weather control experiments. However, many experts and amateur radio hobbyists quickly realized it to be an over-the-horizon radar system. NATO military intelligence had already photographed the system and given it the NATO reporting name Steel Yard. This theory was publicly confirmed after the fall of the Soviet Union. 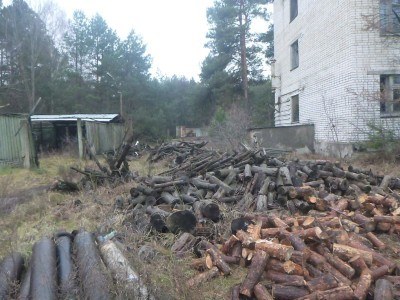 Wood on the walk to the Duga Radars

Misha gives us detailed information all the way through the dander and then we arrive back at the car, the same way we came. Next up we are visiting a town called Kopachi. I say “town”, as once it was. These days it sits in ruins, the wooden buildings were mostly destroyed to get rid of the radiation risks. Only a few buildings remain and we head to backpack through them. 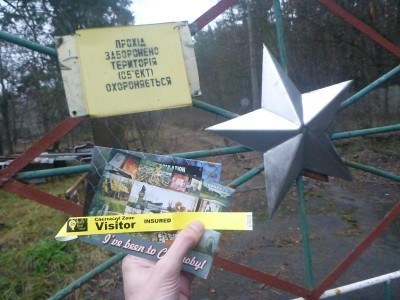 Visiting the Duga Radar system in the Former Soviet Union, inside the CEZ.

Again on this day, as we leave the radar system behind, I know I won’t be back here. This is a one time trip for me. I pondered on that and then we arrived in Kopachi. 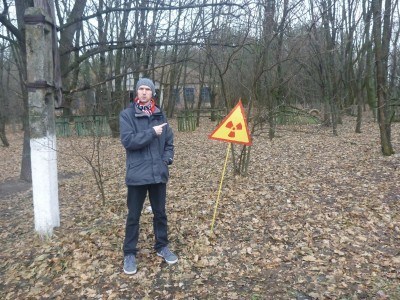 Here are some videos from my trip to this radar system: