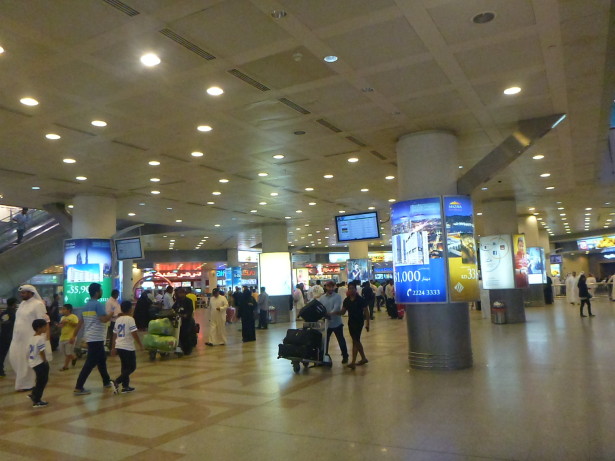 So after spending around 6 months in Europe (my longest jaunt to my home continent in 6 years), I decided to head back to Hong Kong. But there’s no point in flying over endless countries without seeing them, so I decided on a stop over on route. I’ve been to the Middle East a load of times and written about my visa experiences from Bahrain Jordan, Iran, Iraq and Qatar. This time I headed to Kuwait and I was really excited about this place. 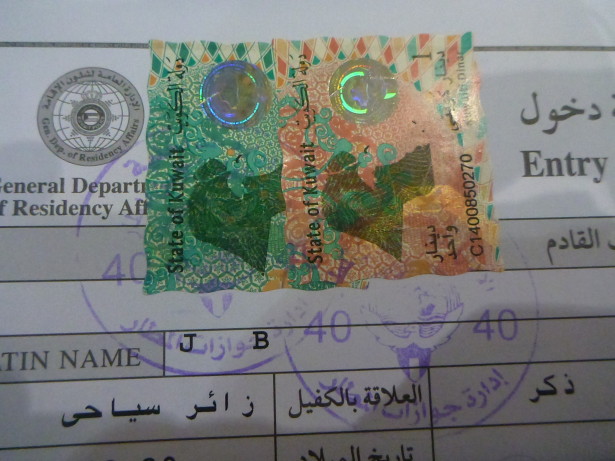 Some Background Information on Kuwait
Kuwait borders Iraq and Saudi Arabia and lies on the Arabian Gulf. Kuwait has a population of over 4 million and they qualified for the 1982 World Cup, getting knocked out in the first round unlike Northern Ireland. Kuwait is oil rich and has a petroleum-based economy, with petroleum and fertilizers being the main export products. The Kuwaiti dinar is the highest valued currency unit in the world, when I went £2.13 UK pounds were equal to 1 Kuwaiti Dinar. 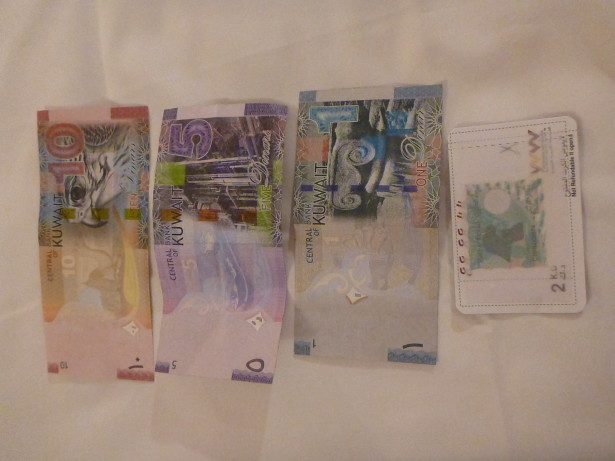 Petroleum accounts for nearly half of GDP and 94% of export revenues and government income. During the Iran – Iraq war in the 1980s, Kuwait supported Iraq but later refused to forgive the debt owed by Iraq. Kuwait was invaded by Saddam Hussain’s Iraq in 1990 amid rumours Kuwaitis were stealing oil belonging to Iraq. The US and UK coalition forces moved in and defeated the Iraq army in the Gulf War by February 1991. Since then economy has been up and down but Kuwait remains and oil rich, wealthy and safe nation with a proud past. 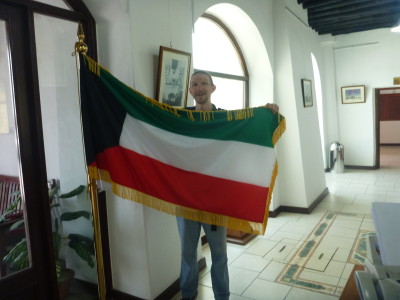 Getting to Kuwait
Most travellers head to Kuwait by flight. Arriving by boat is an option. Overland is a bit more tricky. The border between Iraq and Kuwait overland is completely blocked by strong electric fences. These have been breached during times of war but the border to Iraq remains closed. Kuwait also borders Saudi Arabia in an area which is largely desert. 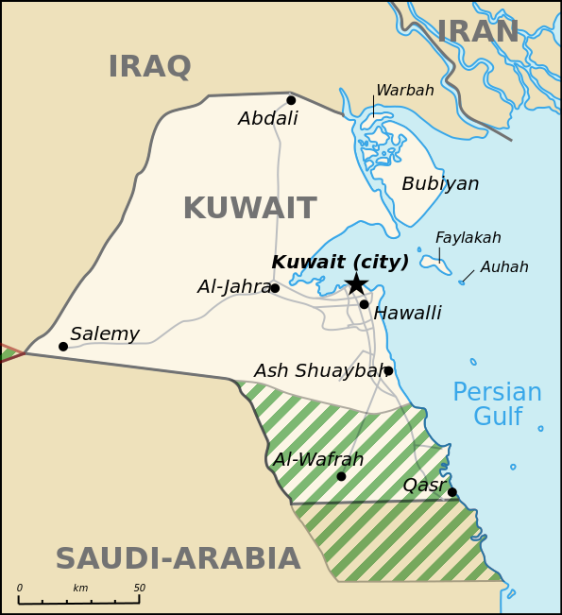 There was oddly a neutral zone between Kuwait and Saudi Arabia – an area where both countries (or neither) owned and it acted as a border. This is now divided into a Kuwaiti part and a Saudi Arabian part. Enough of the history and borders – I decided to fly into Kuwait and therefore I was due to arrive at Kuwait International Airport, on the edge of Kuwait City, the capital. I was on a flight with Atlas Jet from Istanbul Ataturk Airport to Kuwait City. This post is all about the Kuwait TOURIST Visa by the way – no business or resident visas. 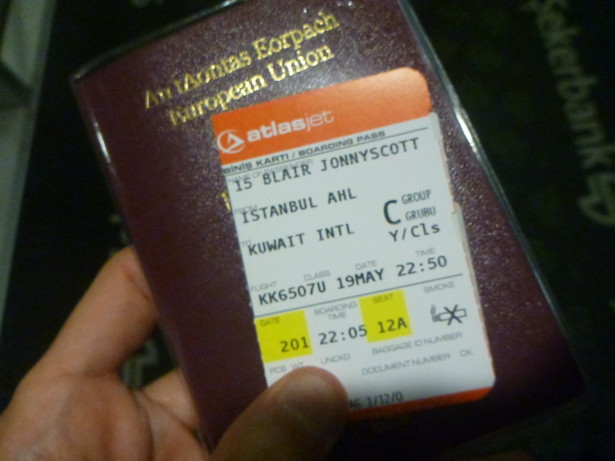 Flying to Kuwait from Istanbul in Turkey

Arriving in Kuwait City International Airport
Once you arrive at Kuwait City International Airport, head towards immigration. The immigration section and passport checks are before the baggage checks as they are in most international airports. When you see a sign pointing down some stairs for Immigration, ignore it – stay on the same floor and head to the Visa Section. The visa section is upstairs, then once you have the visa you can join the queue for immigration. It was actually a similar process to the visa in Tanzania Airport and in East Timor Dili Airport. I travel on an Irish and a British passport. Both nationalities require a visa for Kuwait. 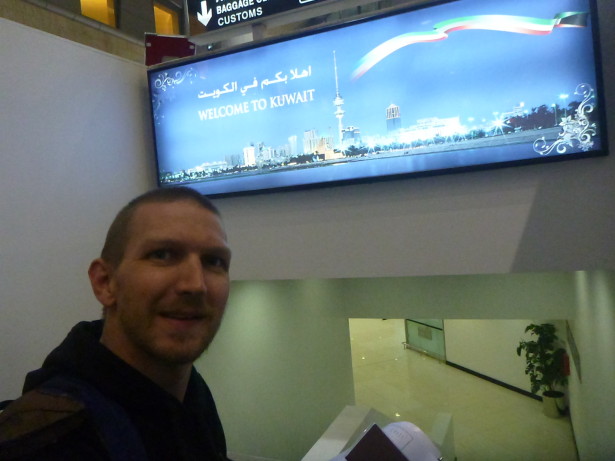 * Nationals of Afghanistan, Iran, Iraq, Syria and Yemen are barred from entering Kuwait due to “difficult security conditions” in those countries. Citizens of Bangladesh are also barred from entering Kuwait. Citizens of Pakistan are only issued issuing family and commercial visas. Additionally entry and transit is refused to Israeli citizens, even if not leaving the aircraft and proceeding by the same flight.

All other nationalities require a visa in advance. These details are correct as of May 2015. 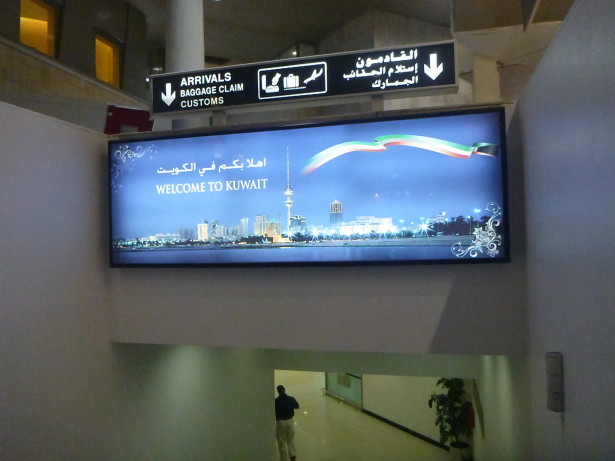 Passports with the Following Stamps or visas will be Denied Entry to Kuwait
Needless to say you must ensure you do NOT have stamps from Israel (or that prove you entered Israel like a Jordan/Egypt stamp) or Iraq or Iraqi Kurdistan or you will be refused entry to Kuwait. 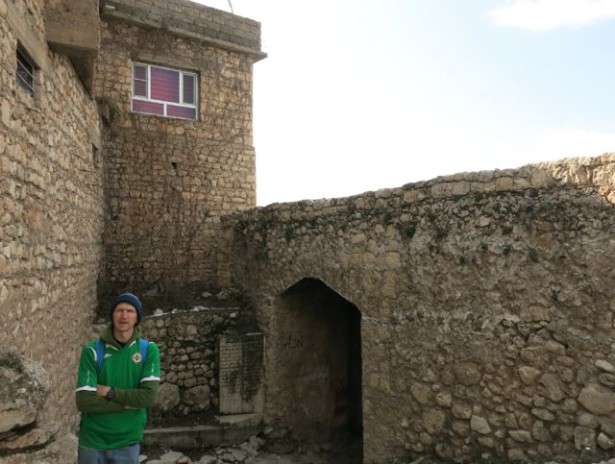 If you are unsure about how to avoid Israeli stamps on your visit to that country, you can read my tips here and also here.

Getting Your Kuwait Visa at Kuwait International Airport
So you’ve landed and instead of heading to the Immigration and Passport Check you head to the Visa Section. The Visa section in the airport is oddly opposite a cafe and beside a money exchange. If you do not have any Kuwaiti Dinars on arrival, please make sure you get some at this point. You can get Kuwaiti Dinars either by:
– Using the ATMs next to the Visa section
– Exchanging hard currency at the Money Changer (USD, UK Pounds etc.) 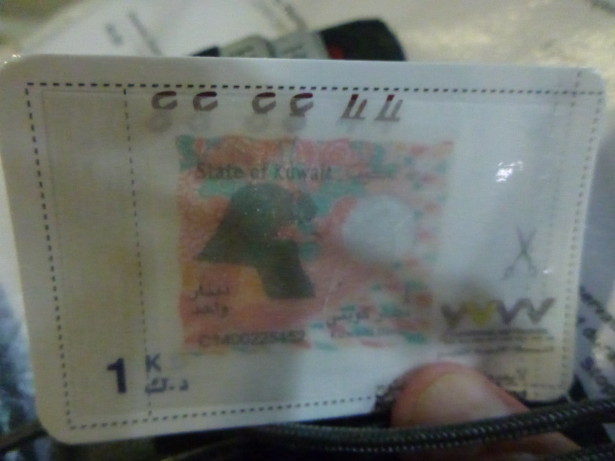 A 1 Kuwaiti Dinar stamp which you use to pay for the visa (not cash). 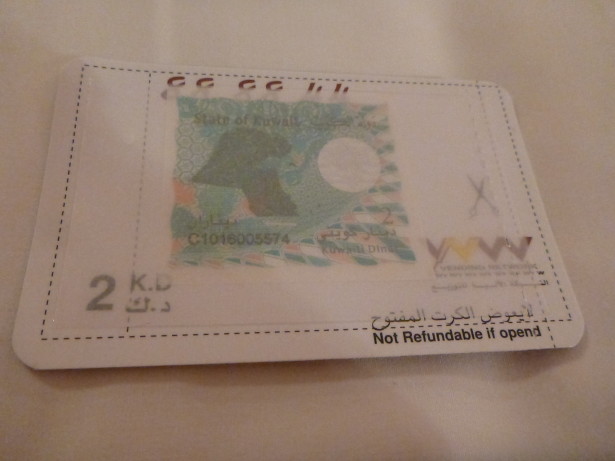 A 2 Kuwaiti Dinar stamp which you use to pay for the visa (not cash).

To get the visa on a British or Irish passport I needed 3 Kuwaiti Dinars (which is about £7 pounds or $10 US Dollars). I am not sure if it is the same price for other nationalities or not. Payment  must be made in Kuwaiti Dinars. But then the confusing part is that despite the fact that the visa costs 3 Kuwaiti Dinars, you have to pay in the equivalent of Kuwaiti stamps rather than banknotes and coins, which is either: 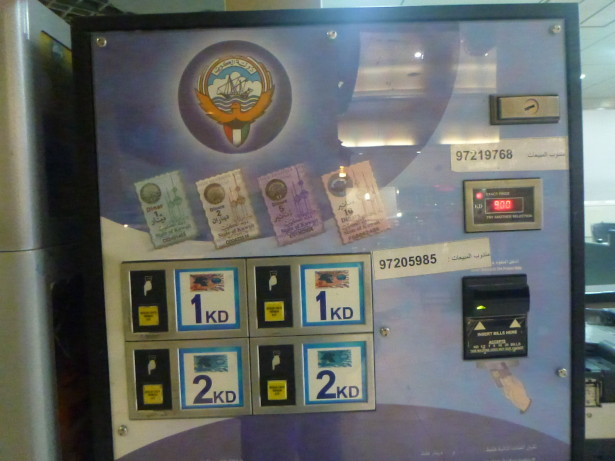 The machine which issues Kuwaiti Dinar Stamps for your visa

Then it’s time to queue for the visa. You need to queue and to queue you must pick up a ticket and wait for your number to be called! 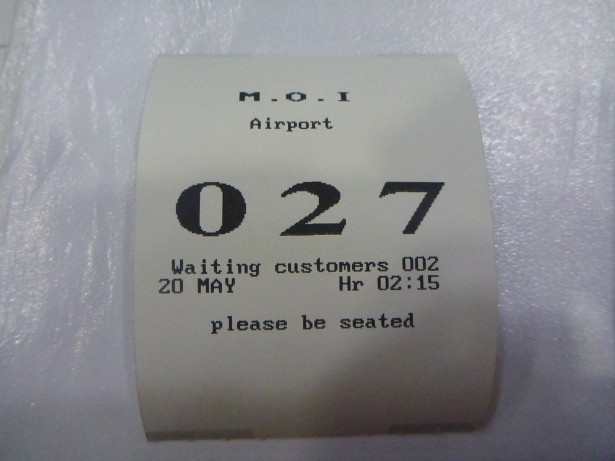 The number to wait in the queue for my visa to be issued.

While you are waiting for your number to be called, fill in the immigration form which is simple and is one piece of card with two sides. You’ll need to put the hotel name on there. I was staying at the Ibis Salmiya Hotel in Salmiya. 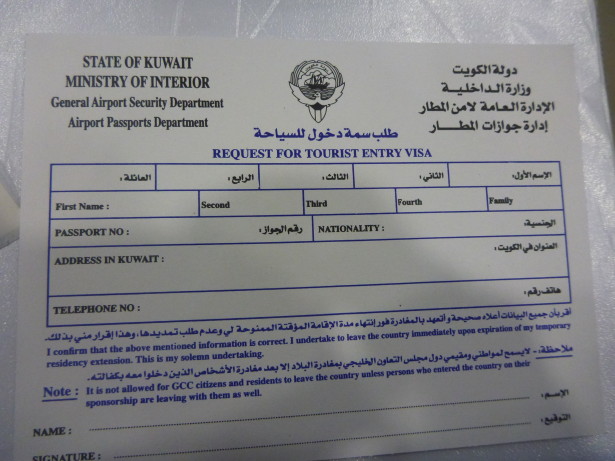 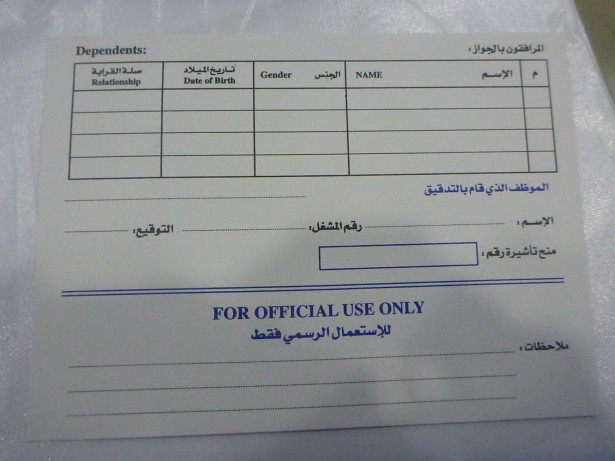 The Kuwaiti Visa Form – back.

Then your number is called, you hand over your passport, your 3 Kuwaiti Dinar’s worth of stamps, your immigration form and your queue number. They might ask you a few questions. Mine was if this was my first visit to Kuwait which it was. They stamp your passport with a single small entry stamp like this: 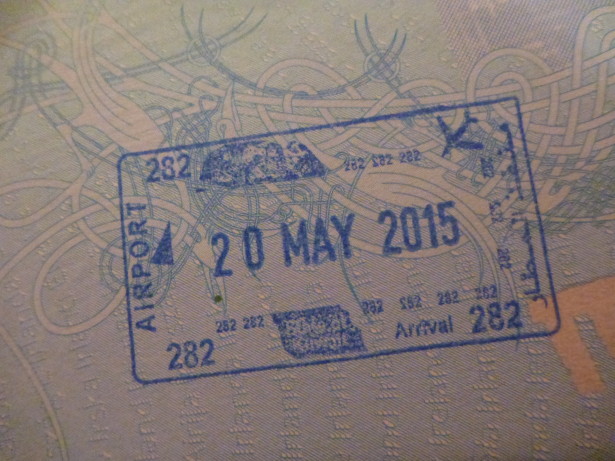 My entry stamp for Kuwait. 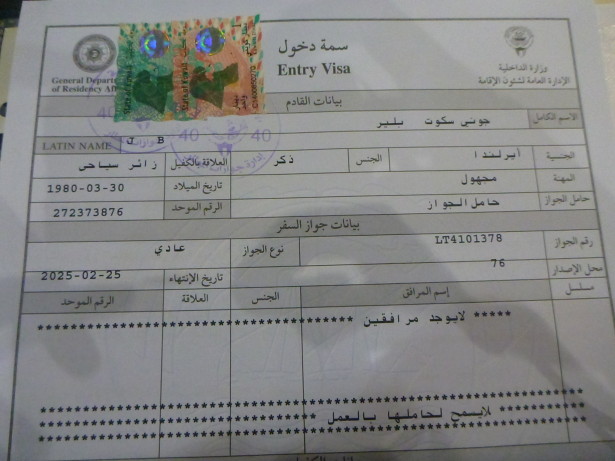 The visa also has a separate entry stamp on it like this: 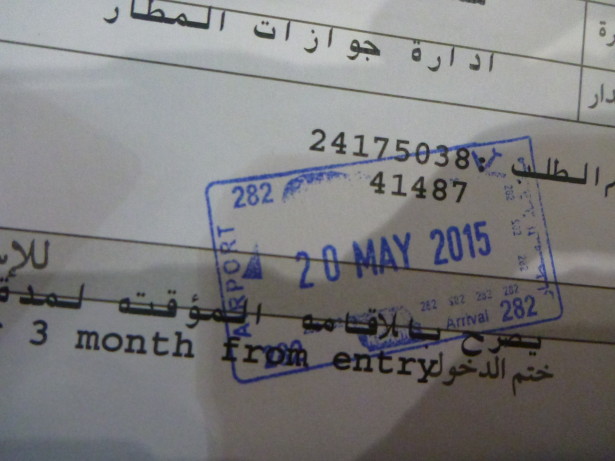 Kuwait Entry stamp on the visa A4 piece of paper

I was given 90 days/3 months on arrival but was only staying for 3 days, so realistically if you wanted you could stay here for 3 months! After getting the visa, head through the immigration where the officers simply check the visa. There is a machine in front of them for a fingerprint scan, but they didn’t ask for my fingerprints. Perhaps they are sometimes used and sometimes not. 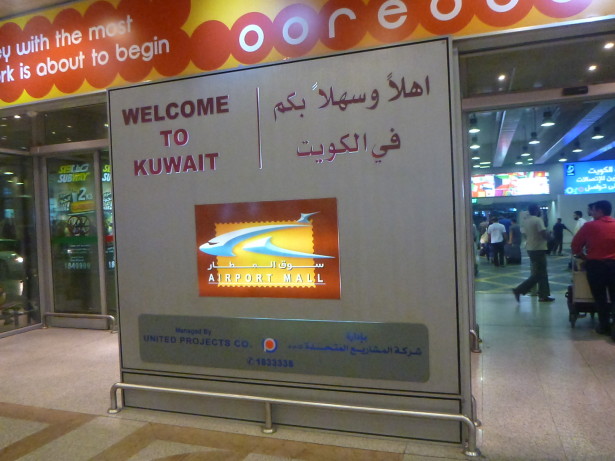 Congratulations you are now in Kuwait!

You are now ready to explore Kuwait! To get to your hotel, please note that all the taxis have set prices depending on the part of the city you are heading too. Outside the airport terminal is a list. I headed to explore Salmiya first, staying at the Ibis Salmiya. Later I backpacked the main sights of central Kuwait city while staying at the Kuwait Ibis Sharq Central. 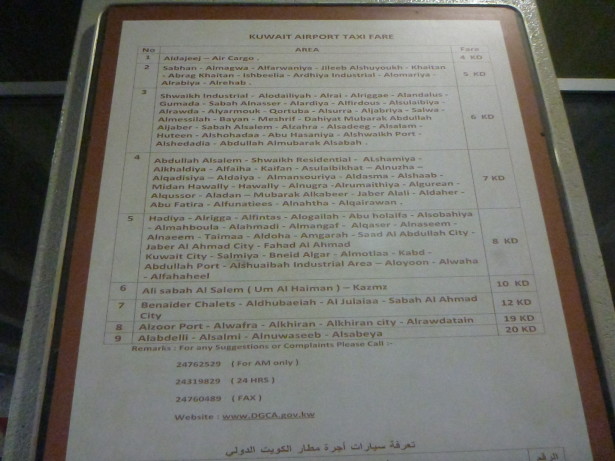